There is something almost mystical in clouds of incense smoke filling a sacred space, ascending to heaven and seemingly carrying the prayers of the faithful to God. Some people delight in the scent of incense; others find its sweetness cloying.

Whatever one’s opinion of it, incense has been an element of worship in Catholic churches for centuries. Father Dennis DiBenedetto, newly installed pastor of St. Robert Bellarmine in North Manchester, explained its historical significance. “In the Temple, the Jews would offer incense twice a day, morning and evening, so it’s a direct carryover from the Temple worship.”

The general use of incense dates back even earlier: to centuries prior to Judaism, among numerous religions in both the Middle East and Asia. Incense is mentioned over a hundred times in the Bible, most notably as the frankincense and myrrh presented to the infant Jesus by the Magi. 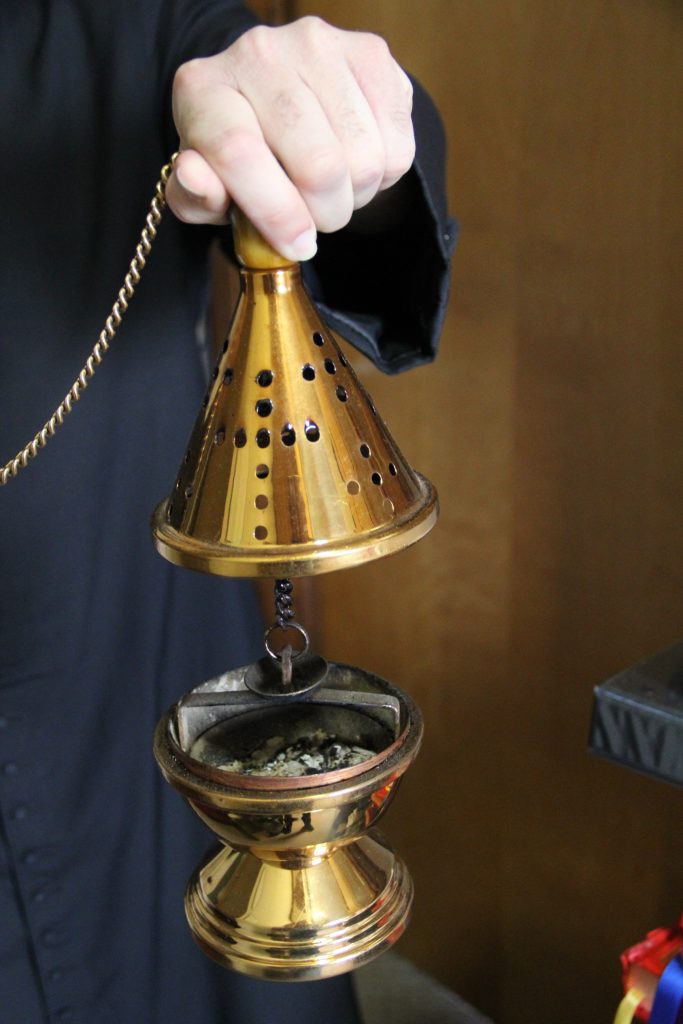 Photos by Jennifer Barton
Father Dennis DiBenedetto, pastor of St. Robert Bellarmine Parish, North Manchester, holds an example of a typical thurible in which incense is imposed atop a burning charcoal brick. Once closed, smoke from the incense will rise through the holes in the thurible, creating a haze in the church and diffusing the scent of the incense.

Frankincense and myrrh both come from the resin of trees. In biblical times, both gifts were probably more highly prized than the third gift – gold.

There is symbolism in the Magi’s gifts as well, since the resin is harvested by wounding the tree to bleed it and allowing the sap to harden into “tears” reminiscent of wounds suffered by Christ on the cross. Another piece of its symbolism is the healing properties of both frankincense and myrrh: the Magi’s gift of both represent Jesus’s role as healer.

The smell of frankincense is deemed pleasing enough for use in some commercial perfumes, and even its aroma is biblical. In Ephesians 5, St. Paul refers to Christ’s sacrificial love for mankind as “a fragrant offering,” referring to the practice of burning incense in the temple.

Many Catholic church supply companies and Orthodox monasteries sell quality incense in a variety of scents. Rose is very popular, though the different blends are not always named for their smell. There are also hypoallergenic types of incense. True frankincense has no fillers and should burn quite clean, according to Father DiBenedetto.

Incense comes in the form of pellets that are melted over a charcoal fire inside what is known as a censer, or thurible – an incense burner on a long chain than can easily be swung by a priest, deacon or server. The server who carries the incense is known as the thurifer. This job is usually given to older boys or seminarians. The largest thurible in the world is one called the Botafumeiro, which hangs in the sanctuary of Santiago de Compostela Cathedral in Galicia, Spain: It requires eight men to swing it to a height of nearly 70 feet.

The symbolism of using incense during the Mass is deeply imbedded in Catholic tradition. Psalm 141:2 says: “Let my prayer be counted as incense before you, and the lifting up of my hands as an evening sacrifice.” Father DiBenedetto stated that this is part of the reason for its use. “It symbolizes prayer rising to heaven. The other thing is that priests who use a lot of incense … it kind of creates this haze, like a veil. Going back to the Temple in Jerusalem there was that huge curtain; when you use the incense it makes this veil, this haze in front of the sanctuary.” 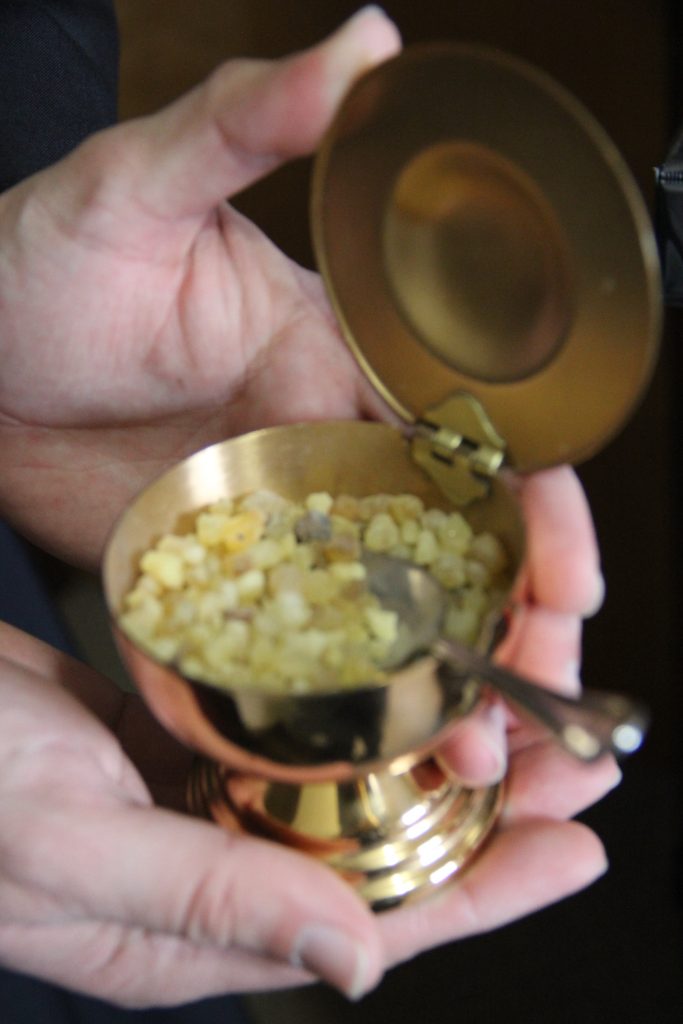 Frankincense pellets lay inside what is known as an incense boat, with spoon.

This veil illustrates the holiness of the sacrifice on the altar. It represents the mystery of the transubstantiation; how the bread and wine are transformed into the Body and Blood of Jesus Christ.

There is little in terms of requirements on the use of incense. Its purpose is to bring a deeper sense of reverence to the Mass, so therefore it is appropriate for use on Sundays, holy days and solemnities at the discretion of the pastor. Since Lent is a more austere season, the use of incense is generally decreased.

At the end of the Lenten season, incense reenters worship, usually on Holy Thursday during the eucharistic procession. It is never used on Good Friday. And of course, incense is used during the Easter Vigil to bless the paschal candle. Sundays throughout the Easter season are exceptionally appropriate for incense use, as they are festive days.

Father DiBenedetto described the parts of the Mass in which to expect the use of incense. First, it is used at the beginning, it is also used in the procession, entering before the cross and the candles. “At the altar, the priest would impose (or add) incense in the thurible and then circle around the altar – it’s always done counterclockwise looking at the altar,” he said.

Immediately before the reading of the Gospel, the priest may incense the Book of the Gospels. Lastly, it is used during the offertory, at which time the priest incenses the gifts by making the sign of the cross or a circle over them. After that, he gives the thurible to the deacon or a server, who in turn incenses the priest before doing the same to the congregation.

Two other occasions on which incense should be expected are funeral Masses and the exposition and benediction of the Blessed Sacrament. At funerals, the priest will incense the casket to show reverence for the deceased person. Father DiBenedetto noted, “We incense things that are holy: the Eucharist, the Book of the Gospels, and the corpse because it had been a temple of the Holy Spirit.”

During adoration, when the Blessed Sacrament is exposed, incense should be used during the singing of “O Salutaris Hostia” — “O Saving Victim”— and at benediction during the “Tantum Ergo.”

Out of the roughly 20 churches in North Manchester, Father DiBenedetto said he expects that St. Robert Bellarmine stands alone in its use of incense. “That’s one of the things that makes us uniquely Catholic — we’re the only ones using incense. It shows our heritage and our connection to Judaism. We’re the historical Christian Church and that’s why we do these things that look very weird to modern America: because we’re from this Middle Eastern tradition.”

While Lent may call for a decreased use of incense, it is fitting for Catholics to use at home the sacred forms of worship, such as burning incense, during the Easter season to honor Jesus’ triumph over death.