Phil Hayes, Mike Plenzler, James Summers and Harry Verhiley, all members of St. Pius X Parish in Granger, are pursuing a vocation to the diaconate. They are currently in formation and encouraged by their pastor, Msgr. William Schooler.

A deacon’s role in the Church is Biblical. St. Stephen, “a man filled with faith and the Holy Spirit,” (Acts 6:5) was one of the earliest deacons mentioned in the New Testament. Their role was to care for the poor and widows in the apostolic community. Deacons in the modern-day Church fill a similar role of service.

One commonality in each of their stories was the “call to give more,” as Verhiley said. While the diaconate may not have been in their earliest career plans, they had already been contributing much of themselves to the parish, and this seemed taking the next step. Plenzler stated, “I’m in a spot in my life where I need to put my talents to work for God.”

Since joining St. Pius in 1997 with his wife, Tracey, Plenzler has become involved most notably in Christ Renews His Parish. “These activities, meetings and retreats have made me look deeper at what I am doing with my life. My mother and father, brothers, sisters-in-law, friends and fellow St. Pius parishioners are all supporting me in this discernment,” he said.

Plenzler points to his father’s ordination to the diaconate in the Diocese of Toledo as inspiration as well. “[It] was a moving experience beyond all others.”

Summers began his service to the Church around 40 years ago as a lector, bringing the Word of God to fellow Catholics. “It is one of my greatest joys in life … I look forward to being able to proclaim the Gospel.” 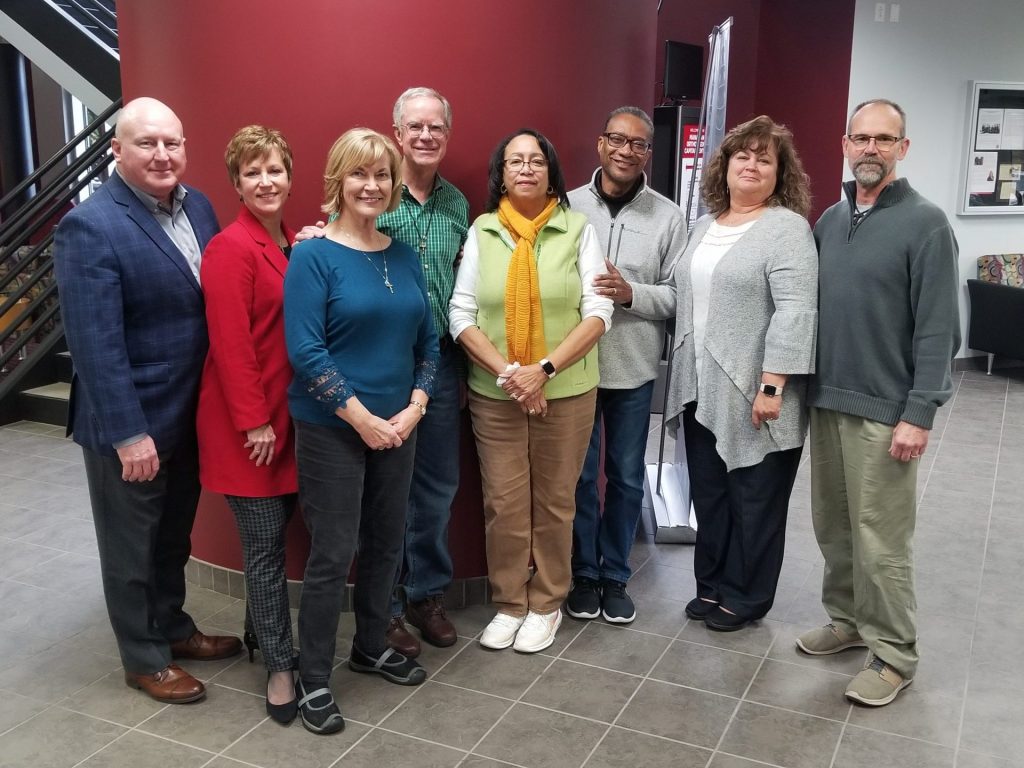 Photos provided by Kim Mauch
Parish involvement led four men, parishioners of St. Pius X in Granger, to their calling as deacons. They are currently in formation. Pictured from left, with their wives, are Mike and Tracey Plenzler, Claire and Phil Hayes, Wendy and James Summers and Joanne and Harry Verhiley.

Remaining Catholic has not always easy for Summers and his wife, Wendy, who experienced instances of racism in predominantly white Catholic communities. They even considered leaving the Church during some of those moments. But the community at St. Pius has provided a positive experience for them, and they attended the National Black Catholic Congress in Indianapolis in 2012. “For the first time ever, I did not feel like a visitor in my own church,” said Wendy.

When the Diocese of Fort Wayne-South Bend formed the Black Catholic Advisory Board in 2012, James and Wendy were asked to join. “Through that, we learned what the Church truly teaches about valuing others and were trained in building intercultural competence for ministers,” James said.

Hayes’ journey to the diaconate was more literal. On a pilgrimage to Fatima during the 100th anniversary, he felt God speak to him through other pilgrims. “They were telling me I should retire (after 38 years in manufacturing management) to do more for Christ’s Church,” he said.

He didn’t know what form his service would take, however, until he saw a notice in the bulletin months later about formation for the diaconate. At first hesitant, a series of homilies from Msgr. Schooler on answering God’s call convinced him. “After nine months of discernment, the classes started one week after my last day at work. This was no coincidence; only God could have planned that timing!”

A deep love for his faith led Verhiley to the diaconate. “I love our Lord, I love His Church and if I can serve in some way, I will. I know the Church needs holy men to serve; I am not holy, but I desire holiness. It seems to be the next step in my life, since I have had the great opportunity to serve our Lord’s Church. Each time I heard or read the Gospel where our Lord commands ‘put out into the deep,’ I have felt the need to respond.” He sees the diaconate as a way to continue teaching theology and answering God’s call to trust in Him and continue in His work.

A deacon acts to encourage people in their relationship with Jesus, so not only must his own relationship be strong, he also has to be knowledgeable. Plenzler relished the opportunity to continue learning about his faith “so I could put it into action to bring more people to Christ.”

James Summers is eager to help build relationships. “Jesus went directly to the excluded and very intentionally made them know they were loved. Perhaps I can recognize those who, for whatever reason, don’t feel invited or welcomed and put my arms around them, walk with them and help them see they are both welcomed and loved.”

St. Pius currently has a deacon, Louis Giovannini, who assists at daily Mass and during special sacraments and funerals, according to Msgr. Schooler, as well as holding down a full-time job. “He also runs a very successful program, ‘Marriage in Christ,’” said Msgr. Schooler.

He emphasized the many ways that St. Pius fosters vocations to all aspects of religious life, from priests to religious sisters to deacons.

“As members of St. Pius X Catholic Church in Granger, we recognize our role in helping young people discern their vocations. In our parish school, religious education program and in our homeschool community, we teach the various ways to live our baptismal promises and pray for those already in formation.”