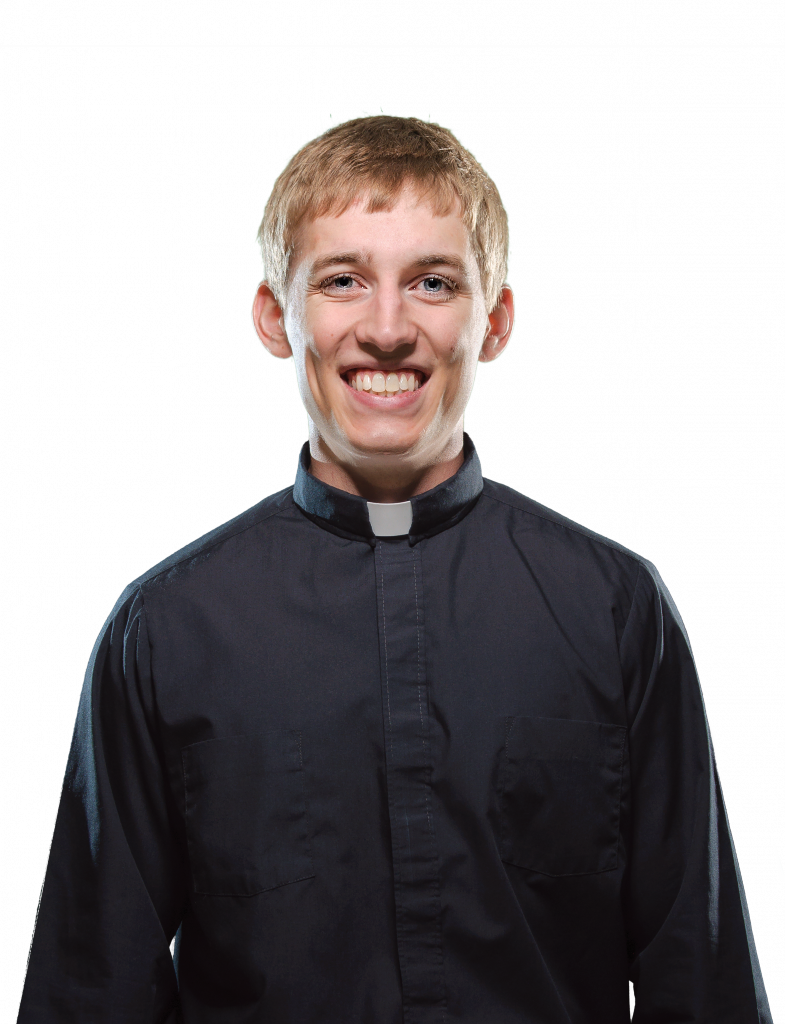 “Here is my future; I’m giving it to You completely.” Zane Langenbrunner spoke this prayer before the Blessed Sacrament when his life plans came crashing down on him in the form of a broken engagement. For years prior, he had told people: “I’m open to whatever the Lord calls me to.” Yet it was only after he had “been stripped of everything I knew about my future” did he give himself fully to the God who called him to the priesthood. “It’s just like total surrender,” he stated in awe.

Here is link to a livestream from the FaceBook page.

Langenbrunner is the younger of two sons born to Michael and Angela. Raised in Mishawaka, both he and his brother Adam attended St. Bavo School prior to its merging into Mishawaka Catholic before transferring into public schools. He described his upbringing in “a pretty normal Catholic family,” where the faith was an important part of his life.

He maintained his Catholic faith through involvement in youth group, but until his Confirmation retreat in eighth grade, he had been only nominal in practice. At the retreat, he began thinking about his life. One particular talk brought him into a profound encounter with Jesus. “That was the moment the Lord used to drop a grace bomb on me and opened my heart. … It totally transformed my heart.”

Through his high school years, the priesthood was little more than a “fleeting thought,” easily brushed aside. He studied speech pathology at Ball State University, where he continued to grow in his faith through the campus Newman Center. There he thought he discovered a vocation to the married life with a young woman he dated for two years. Not long after they became engaged, however, she began to have doubts that were surely the nudging of the Holy Spirit. They broke their engagement just before graduation.

“I had what I thought was the Lord’s plan for my life … it’s not like it was so much I was resisting the will of God … it really was genuine; I had discerned and thought very much that God was calling me to marriage.”

The dismantling of his plans left him unsure of his path as a 22-year-old college graduate. During the summer between his graduation and his upcoming year in graduate school in Cincinnati, his discernment process began to bear fruit. He was working in Mishawaka and rode his bicycle to the convent of the Franciscan Sisters of Perpetual Adoration every day after work. Here, Langenbrunner laid himself bare at the feet of Jesus, surrendering to what God wanted of him.

Suddenly, “I just kind of felt this desire to be a priest rise in my heart that I had never really noticed before,” he said. “I think the seeds of it were probably there from that first initial conversion, but I wasn’t ready to hear the call to be a priest until I had been kind of stripped of all the plans that I’d had. And the Lord taught me to trust Him, even without knowing what was going to be in the future. So I was ready to hear that call at that time, and it was so persistent.”

Everything he read in the Bible, every prayer he spoke led to the same conclusion. Instead of shrugging the signs off as he did in high school, Langenbrunner decided to take the next school year to prayerfully consider priesthood. As it happened, he met a young priest in Cincinnati who invited him to visit a nearby seminary, the Pontifical College Josephinum, which “kind of opened the door” for him to pursue seminary studies. He met the future Father Benjamin Landrigan, studying there at that time, and found a mentor and friend in him.

With that, “It’s just been a series of walking through the next open door.”

Those doors eventually opened on an invitation by Bishop Kevin C. Rhoades to study in Rome at the North American College along with fellow seminarian Sam Anderson. After much prayer, both men accepted the bishop’s invitation.

Studying in Rome has been a unique and privileged experience. It took a period of transition to learn the language, and adjust to the fast pace of life in Rome and the educational style. The pandemic proved a blessing in disguise, and as the seminarians were sent home, Langenbrunner had the chance to reconnect with his support system. He returned to Rome the next year equipped with the knowledge of what to expect.

Through all that, he has been led to “an even greater dependence on the Lord.”

He reflects on those who have influenced his path over the years, whether he realized it or not at the time, including his childhood pastor, Father Barry England, who served at St. Bavo until his retirement in 2015. “He was always there, he was always present. And that spoke volumes to me of just the fidelity of the priesthood.”

Through the summer, the two reconnected and Father England gifted Langenbrunner with a pyx, a paten, and the chalice with which he had celebrated his first Mass. Langenbrunner was floored by the gifts, saying, “That was an incredible moment of the tradition, the handing on of priestly ministry from one generation to the next. That was really powerful.”

Ordination to the diaconate for him, is “the end of a process that’s really only the beginning of a new life; a new life of ordained ministry.”

While being ordained at St. Peter’s Basilica is an extraordinary opportunity, what Langenbrunner most looks forward to on that day “is to make the promises and to make them in a public way; to commit myself completely to ordained ministry.”

Additionally, he anticipates preaching homilies and baptizing children as a deacon. His ordination will fall on the Feast of the Archangels, another exciting aspect as his parents both bear names pertaining to the angels.