Each new calendar year offers a fresh start in several ways. This can be true regarding the spiritual life as well. The year 2021 is an opportunity to live one’s Catholic faith in a manner “worthy of the vocation to which you are called,” as described by St. Paul in Ephesians 4:1.

There are baptized people who have already done this well and “have competed well; have finished the race; have kept the faith,” as it is said in 2 Timothy 4: the saints. The Church remembers these friends and holy heroes already in heaven with God forever for their Christian witness and example of a life lived in discipleship of Jesus Christ.

Here are a few suggestions of saints to walk with in the new year. They are waiting to support the faithful here on earth, as modern Catholics travel roads similar to those the saints took years before. As intercessors, they can pray for those on earth and be good spiritual friends for the journey through 2021; helping us, as St. Teresa of Avila said, “to have courage for whatever comes in life — everything lies in that.” 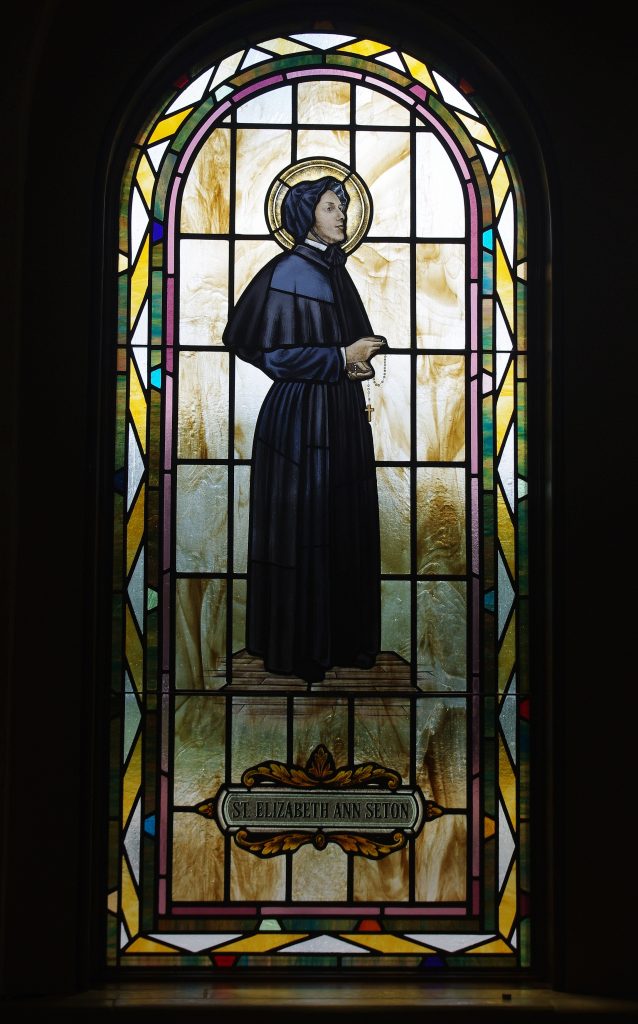 An American convert, wife, mother and later religious sister, was born in 1774 in New York City and died in 1821 in Emmitsburg, Maryland, where she founded the first Catholic girls school in America and the first American congregation of religious sisters, the Sisters of Charity. Her home in New York City is still a place of pilgrimage on the southern tip of Manhattan by the Statue of Liberty. She also lived in quarantine and dealt with great sickness and death. Her husband died of tuberculosis, leaving her to care for their five children. She started an academy for young ladies to support her family. Her already rich prayer life grew, and she became Catholic in 1805.

This married couple lived lives of true charity and Christian witness to love through the vocation of marriage. In a month focused on romantic love, they both demonstrated a variety of human love while focused on God, who is love. Together they had eight children, four of whom died as infants or young children. They parented well through difficult times and their youngest daughter, Therese, was canonized a saint.

Lent this year might be a good time to reach out and resolve any disagreements with others that may be left over from 2020 and repair those relationships. St. Rita of Cascia can be a guide in that endeavor. A peacemaker from Italy in the late 1300s, she dealt with her husband’s murder because of a vendetta. Her medieval community struggled with a tit-for-tat tradition of vengeance that devalued human life. She prayed her sons would never commit a mortal sin. St. Rita recognized these sins for what they are and strove to live a life of harmony and peacemaking, despite difficult social and familial issues. She became an Augustinian nun toward the end of her life, after her sons and husband had died.

St. Philip Neri was a popular Italian layperson who lived during post-Renaissance times of clergy issues, corruption in Rome and malaise in parishes. He used his social circles for Christ, gathering people for prayer and discussions and serving the poor. With a good sense of humor and charity, he encouraged people to be their true selves and live holy lives. After his spiritual director encouraged him to become a priest, Neri complied. He founded an oratory in his name, a religious institute of priests who lived in community with daily afternoons of education and music. His work, both in his own life of holiness and for Rome, were essential during the Counter-Reformation. 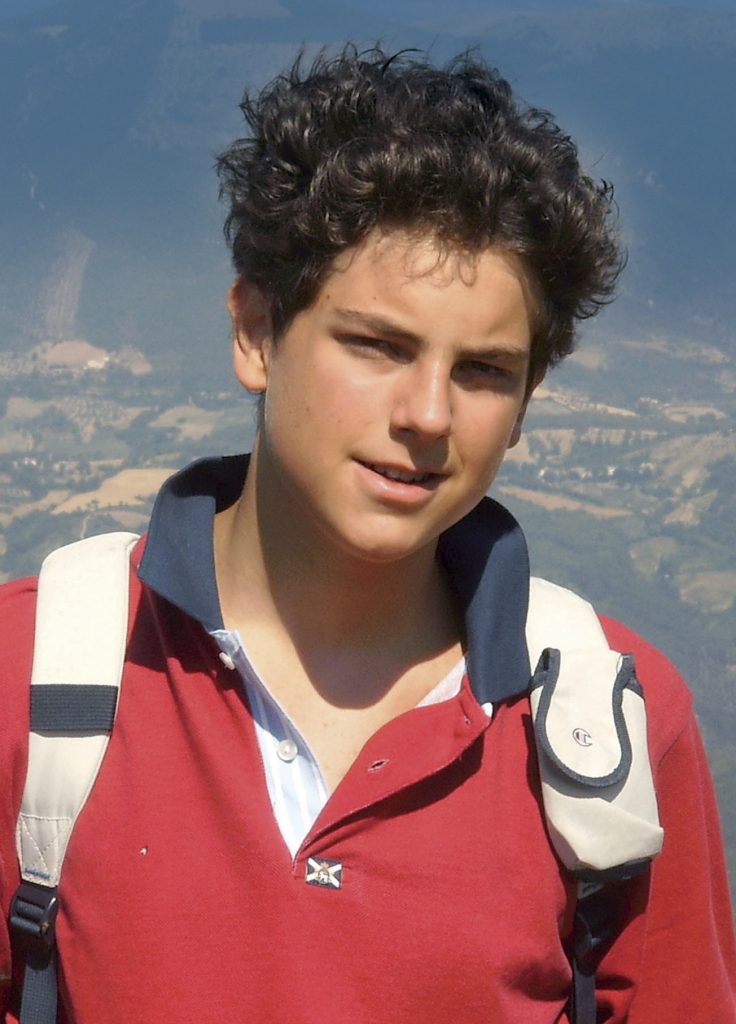 As a young teenager, Blessed Carlo Acutis had a profound love for the Eucharist. In a month when many children receive the sacrament of first holy Communion, Acutis’ intercession can support this step on the spiritual journey. Even as child, he had such a love for Jesus in the Eucharist that every time his little family would pass a church building, he would beg to go inside and say hello to Jesus. His witness to God inspired his mother to learn more about the Catholic faith and lead to both his parents returning the faith. He knew well the temptations and challenges of modern life but chose every day to stay focused on God and God’s will for his life.

St. Therese Martin of Lisieux spent much time at home, but her faith life still flourished. In the late 1800s, she stayed at home in Alencon (with her parents, Sts. Louis and Zelie Martin) and later Lisieux, France. As a young adult and Carmelite nun, she lived in convent, praying for the world and sanctification of all people from her cell. Creatively she embraced modern ideas, such as the new invention of an elevator, to contemplate deeper ways of understanding God. 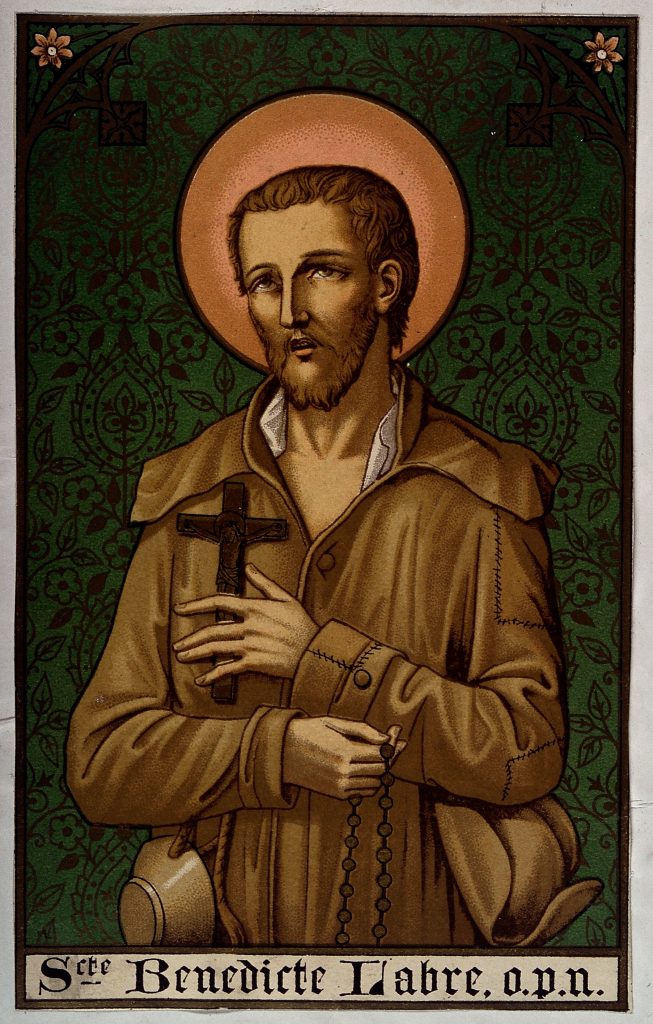 St. Benedict was an Italian monk and mystic who lived during the 500s. He wrote the Rule of St. Benedict and founded the Benedictine order. A homebody, St. Benedict stressed extending Christian hospitality to all guests equally. The order does not move its religious members from place to place but instead values staying in one physical location and deepening relationships of service there. This was a challenge for many people in 2020, but perhaps it could be seen as a blessing in 2021. 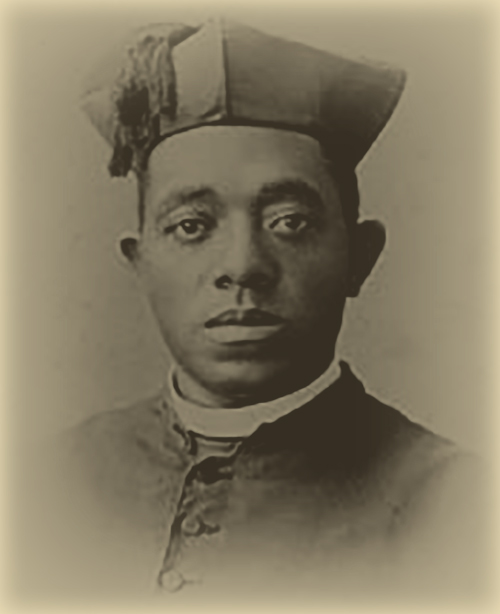 Father Augustus Tolton was the first African American priest in the United States of America. Born a slave during the start of the Civil War in Missouri, he lived a life of dedicated service to God’s people, dying very young in the summer of 1897 in Chicago. His mother led him in a life of faith, despite numerous racist attacks. His life was marred by racial injustice, both in and outside of the Catholic Church. No American seminary would accept him, despite letters of support from his parish priest and bishop, so Tolton traveled to Rome to study for the priesthood. There he learned fluent Latin, German and Italian, as well as Greek and African dialects. He expected to be sent on mission to Africa but instead after ordination was assigned a parish in Quincy, Illinois. Because of the many challenges presented him by Christians who did not accept or welcome him due to his race and religion, Tolton struggled; but he succeeded in living a life of holiness during a tumultuous time in America. 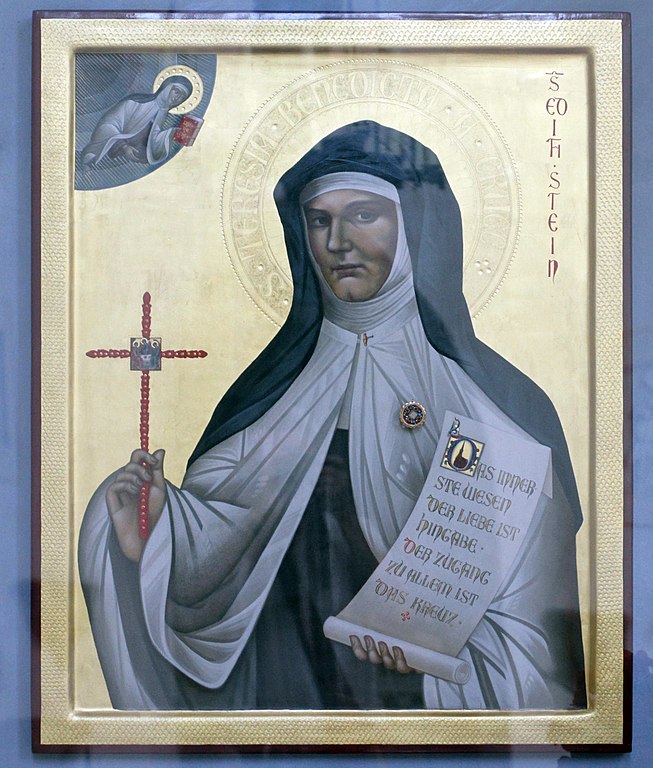 A brilliant, young academic woman, St. Theresa Benedicta of the Cross was born on Yom Kippur, the Jewish Day of Atonement, in the early 1900s into a Jewish German family in Poland. Her birth name was Edith Stein. She was the youngest of 11 children. As a teenager she became an atheist. An excellent student, she studied philosophy and metaphysics at university, combining the philosophies of St. Thomas Aquinas, Dun Scotus and Husserl. She converted to Catholicism and entered a German Carmelite convent in 1933 as the Nazi threat was growing. Pro-life, her writings emphasized the feminine genius: “The soul of woman must be expansive and open to all human beings, it must be quiet so that no small weak flame will be extinguished by stormy winds; warm so as not to benumb fragile buds … empty of itself, in order that extraneous life may have room in it; finally, mistress of itself and also of its body, so that the entire person is readily at the disposal of every call,” she wrote. She calmly and in faith offered her life to the heart of Jesus for the atonement of true peace before she was deported to Auschwitz concentration camp, where she died. 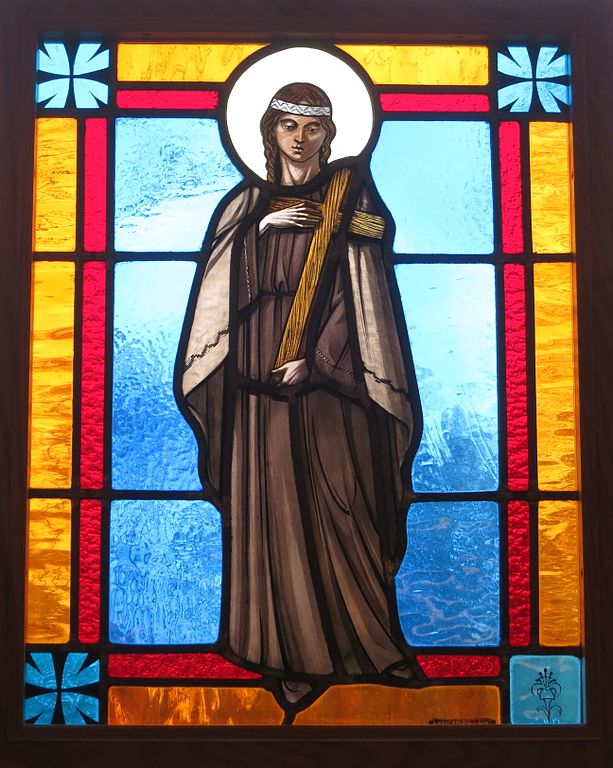 St. Kateri Tekakwitha was a young Native American woman who followed Jesus instead of the customs of her Mohawk tribe in the mid-1600s. Her parents died of smallpox when she was little. Her uncle took care of her and tried to have Kateri married. She had been catechized by the missionary Jesuit priests, the black-robed descendants of Sts. Isaac Jogues and Jean de Brebeuf, and desired to only be with Jesus, so she went to live alone in the woods, intrinsically understanding the concept of Christian consecration to virginity. This choice did not sit well with the culture of her tribe. Her decision to follow Jesus led her to leave her birthplace in upper New York and flee to a mission in Canada. Despite these difficulties, her faith in God remained strong. 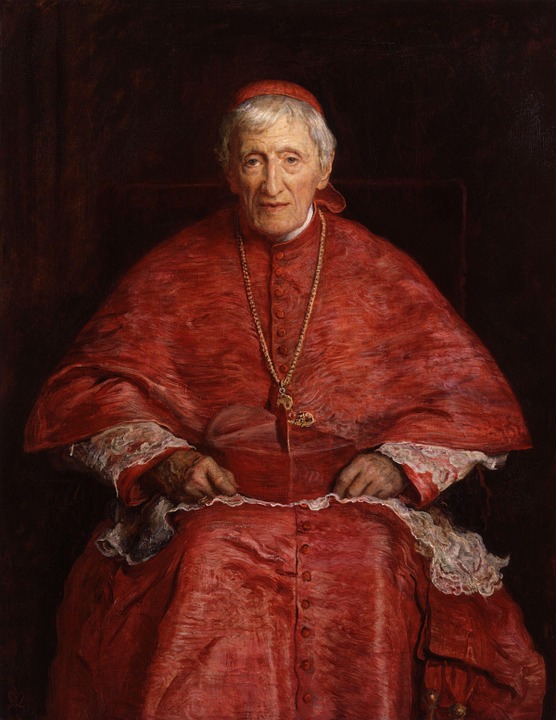 A British convert to Catholicism, St. John Henry Newman was a priest, brilliant academic theologian and poet in the 19th century. He strove with consistency and pastoral care for the true faith and a deeper life in Christ, despite personal cost to his professional academic life and teaching seat at Oxford University. An Anglican priest, he converted to Catholicism after much prayer and study. The consequences were great for him and included the loss of close friends and broken relationships with his family during an anti-Catholic period in England. During this month, when the universal Church remembers the souls of the faithful departed, St. Newman’s words continue to ring true: “Life passes, riches fly away, popularity is fickle, the senses decay, the world changes. One alone is true to us; One alone can be all things to us; One alone can supply our need.” 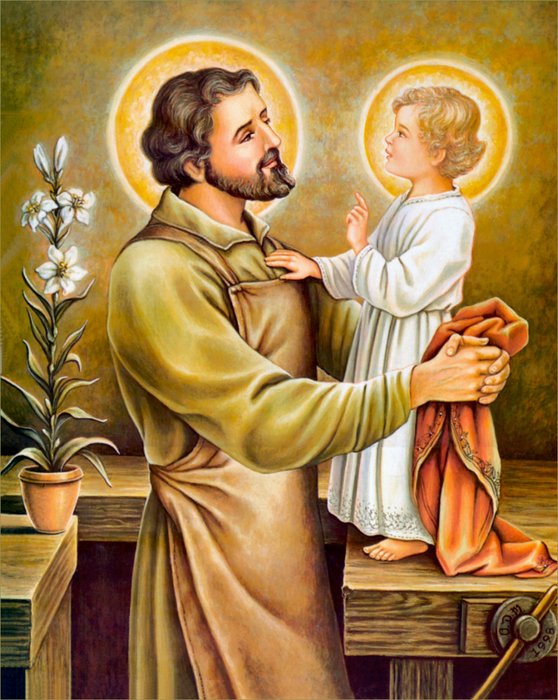 The foster father of Jesus was a Jewish carpenter of the house of David. He lived an ordinary life of simplicity, poverty and obedience in present-day northern Israel during the Roman occupation. Following God’s call, as expressed to him through an angel messengers in his dreams, he heard an unexpected message to take Mary into his house, care for her child and name Him Jesus. No recorded words of St. Joseph are mentioned in Scripture, except the name of his adopted Son, Jesus. Uncertain, he nevertheless followed the angel’s command and was unflinching in his faithfulness and simplicity as he protected the Holy Family, living out his vocation as husband and father. Joseph played a unique role in salvation history and the Incarnation. Pope Francis dedicated this year to St. Joseph, encouraging the faithful to find inspiration in his model through daily prayer and conversion.