Faith is seldom the initial attraction between two people. But for Eric and Kayla Peat it was, and it remains a strong connection. Faith was the heart of what brought them together more than eight years ago.

“I was starving for it,” Kayla said, remembering her rebellious adolescent and college years, when parties and poor relationship decisions dominated her life. By way of an extraordinary series of events, Kayla believes, God drew her out of the darkness of her days at Ball State University and toward His Church through the steadfast faith of the man she would marry.

Kayla had not been in a church since she was 12. Eric was raised Catholic at St. Thomas the Apostle Parish in Elkhart. They met at Ball State through a mutual friend who happened to be Kayla’s boyfriend at the time. 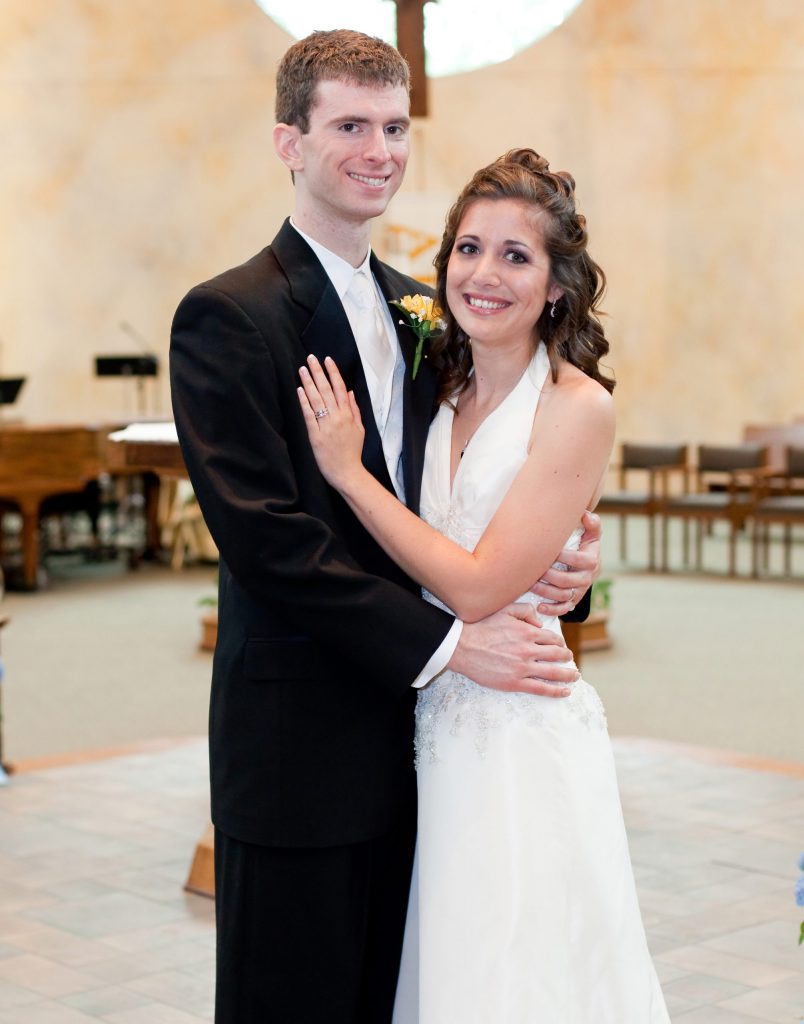 Provided by Kayla Peat
A mutual longing for an active faith brought Eric and Kayla Peat together and led to their wedding at St. Francis of Assisi Parish in Muncie. The Peats are members of St. Therese Parish in Fort Wayne and have three young sons.

Kayla and her boyfriend would spend time at his apartment along with his three roommates, one of whom was Eric. The three other men adopted her as “one of the guys,” she said. Prior to meeting them, she had never known such genuine, kind, considerate men existed.

Kayla already had been in the process of changing her lifestyle and even felt an urge to go back to church. She began asking her boyfriend questions about his Catholic faith, even though it did not play a significant role in his life or their relationship.

The two eventually ended their relationship. Because of the difficult breakup, Kayla didn’t expect to hear from his roommates — now her friends — again. She reverted back to her old ways of partying and drinking.

But Eric felt the loss of a friend as well. A few months later, he and one of the others decided to call Kayla, just to see how she was doing. She remembers sobbing.

“It was the first time someone had missed me, cared about me.” Kayla and the three men began meeting for meals or to play board games.

Still, Kayla struggled with feelings of brokenness. One day when she was driving around Muncie, she began sobbing so hard she had to pull over. She stopped at St. Mary Parish and decided to go in.

All the doors were locked. “I fell down on the steps, like I was just in pieces, and just sobbed. When I finally looked up, there was this statue of Jesus.”

She had literally fallen at the feet of the crucified Christ. “I didn’t know what to make of it at the time.”

What began as a platonic relationship between Eric and Kayla took a different turn when they ended up at lunch together, just the two of them. Afterward they found themselves walking all over campus, talking nonstop. Their relationship deepened.

Almost from the beginning, Eric and Kayla went to church together at St. Francis of Assisi in Muncie. The hunger for a relationship with the Lord was burning strongly in Kayla, and Eric was more than willing to take her to Mass and answer her questions about the faith. He even promised to find the answers he didn’t immediately have, and he always followed through.

“The thing that drew us together was that we each had what the other person wanted,” said Eric. “I had this strong, firm foundation that I had grown up with. She had this fire.”

Kayla agreed. “I fed off his consistency. I was flighty. So to see someone so consistent, that was awesome to me.”

Eric possessed a Catholic mentality about dating, something of which Kayla was well aware.

“I never considered dating someone unless they were Catholic and I could see myself potentially marrying them down the road. All of a sudden, I found myself falling for this girl who had absolutely no background in the faith. But I saw how hungry you were for it, and I saw the person that you wanted to be,” he said to Kayla.

You blessed the union of married couples

so that they might reflect the union of Christ with his Church:

look with kindness on them.

increase your love in them,

and strengthen their bond of peace

so that, with their children,

they may always rejoice in the gift of

We ask this through Christ our Lord.

With that knowledge, Kayla sat Eric down early on and told him the full story of her past; all the years of trauma and bad decisions she had been afraid to tell others, even him.

“He just sat and listened and I looked up at him and he started crying. And he said, ‘I’m just so sorry you had to go through all of that.’” Kayla was stunned.

Eric’s acceptance of her and his assurance that her past was behind her made Kayla feel like she had been set free from some of her brokenness. “As I grew in faith, I realize he did such a Christlike thing for me.”

Two months into their relationship, both knew they were heading for marriage. They made wedding plans, while Eric graduated college and started a new job in Terre Haute. Kayla went through RCIA at a parish in Shelbyville near where she lived with her parents. She went to church every week, on her own.

Eric would drive two hours on the weekends to see her, and they spent Monday nights at RCIA.

“They were such fruitful evenings,” Eric said. “As a cradle Catholic, I enjoyed the opportunity to go through RCIA as an adult and relearn the things I had always known and but maybe had forgotten why.”

And there was a plethora of “why” questions, as Kayla’s desire to understand all things Catholic blossomed. Often, they would sit at her parents’ kitchen table with a Bible and the Catechism, together trying to discover the answers to her questions.

Kayla was received into the Church in April. A month later the two were married at St. Francis of Assisi, the same parish where their faith journey had begun. Very soon, the Peats were joyfully expecting their first child.

In the Peat home, the couple strives to establish a domestic church. Kayla homeschools their three young boys, while Eric teaches his sons religion. The family discusses the daily readings each morning. Both are involved in various ministries at St. Therese Parish in Fort Wayne, where they live.

Eric well remembers the words the priest said to him and Kayla when they were going through marriage preparation.

“He told us that our goal, the ultimate goal as a married couple, was to get your spouse to heaven, and I’d never really thought about that before.” Kayla added, “I think that’s how we’ve thought about it ever since. We took that very seriously.” 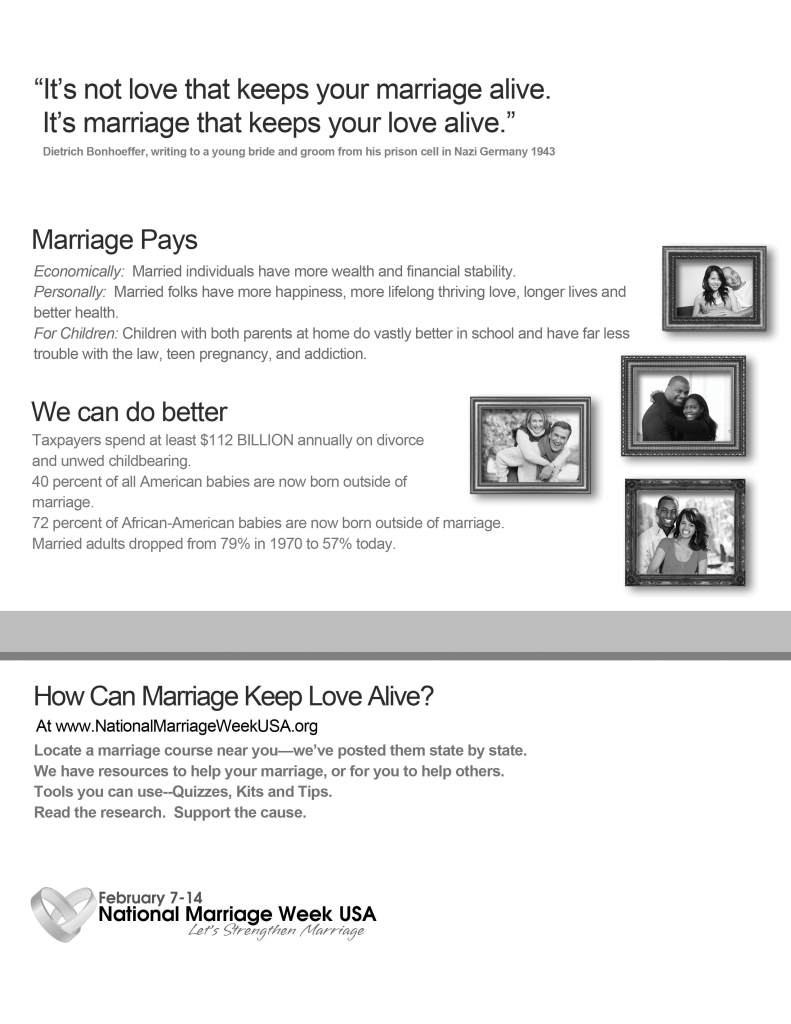