FORT WAYNE — The Diocese of Fort Wayne-South Bend will view 2010 as a year of changes — a new page in the diocese’s 153-year old history.
Bishop Kevin C. Rhoades was installed the ninth bishop of the Diocese of Fort Wayne-South Bend on Jan. 13. Archbishop Pietro Sambi, the apostolic nuncio who is the official representative of Pope Benedict XVI, with Archbishop Daniel M. Buechlein, metropolitan archbishop of Indianapolis, escorted Bishop Rhoades to the cathedra — the bishop’s chair — and handed the new bishop his crosier — a pastoral staff of gold — thus assuming the episcopacy of the diocese.

The day prior to the installation, a massive earthquake shook Haiti. Bishop Rhoades at his installation Mass asked that parishes of the diocese hold a collection for Haiti. This collection brought in $559,000, one of the largest collections in the diocese for disaster relief.

Masses of thanksgiving that honored retiring Bishop John M. D’Arcy who guided and ministered the diocese from 1985-2009 marked the early weeks of January. He has taken the role of bishop-emeritus and remains active in the work of the diocese assisting Bishop Rhoades where needed. 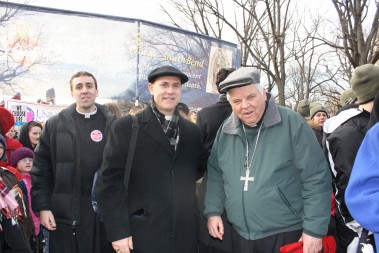 In January, a large contingency from the Diocese of Fort Wayne-South Bend rallied at the national March For Life in Washington, D.C.

Both bishops participated in the National March for Life in Washington in late January. They were accompanied by high school and college students, and the faithful in their stand for life. Holy Cross Father John I. Jenkins, president of the University of Notre Dame, also joined the bishops, the diocesan representatives and students from the university in the march.

In March, Bishop Rhoades spoke about the vocation of marriage at the Diocesan Marriage and Family Conference, coordinated by the Office of Family Life and held at the University of Notre Dame.

Two seminarian brothers, Matthew and Terrence Coonan were ordained to the transitional diaconate by Bishop-emeritus John D’Arcy on April 25 at St. Turibius Chapel at Pontifical College Josephinum in Columbus, Ohio.

Later that month, on June 26, Bishop Rhoades ordained Father Andrew Budzinski into the priesthood. He was appointed as the parochial vicar at St. Vincent de Paul Parish, Fort Wayne. 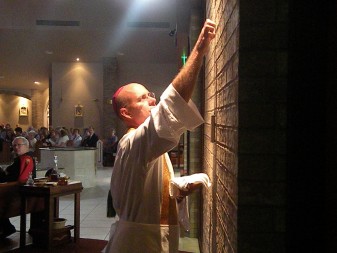 A celebration Mass marked the 150th anniversary of the dedication of the Cathedral of the Immaculate Conception on Dec. 8.

In October, Catholic media personality Teresa Tomeo was the host speaker of the Arise Catholic Women’s Conference at the University of Saint Francis in Fort Wayne.

The diocese bid farewell to two revered priests. Msgr. J. William Lester, an iconic priest in the diocese, died Feb. 20. Msgr. Lester served as co-rector of the Cathedral of the Immaculate Conception and co-chancellor of the the diocese with Msgr. James Wolf, who died Aug. 31 after a long illness.

In staff changes, Natalie Kohrman was named the director of the Office of Spiritual Development in early January. John Gaughan retired from the Catholic Schools Office. He had worked in Catholic education for 57 years. Sister Jane Carew retired from the Office of Catechesis after directing that office for 23 years. Jason Schiffli was named the principal of Bishop Dwenger High School effective July 1. Marsha Jordan was named the associate superintendent of Catholic schools on June 14. Father Jason Freiburger was named vice-chancellor of the diocese.

It was announced in June that Oct. 3 was inscribed as the feast of St. Mother Theodore Guérin into the Proper Liturgical Calendar of the diocese.
Bishop Rhoades welcomed 10 Franciscan Sisters Minor to St. John the Baptist Parish in Fort Wayne and to the diocese on Oct. 2. The Franciscan Brothers Minor were embraced by the diocese and welcomed to the former St. Andrew Parish rectory. They are in the process of renovating the church.