“I remember looking up and seeing the moon – just to the right of the ever-photographical St. Peter’s – and knowing this night was going to be blessed,” Dave Bergeron said of the Holy Thursday tradition of visiting seven parishes in one evening.

This is the second year that Bergeron, along with Joe Platt, fellow choir member at the Cathedral of the Immaculate Conception in Fort Wayne, engaged in the late-night, pre-Easter spiritual practice. Neither man could say what motivated them to begin “church-hopping” last year; it was simply something they had discussed doing for some years prior and finally started in 2021.

This year, they incorporated into their pilgrimage scripture-based reflections which they had read about in an article in the April 10 issue of Today’s Catholic regarding the devotion. According to the article, these readings “recall the seven locations that Christ visited between his arrest after the Last Supper and subsequent death on Good Friday.” 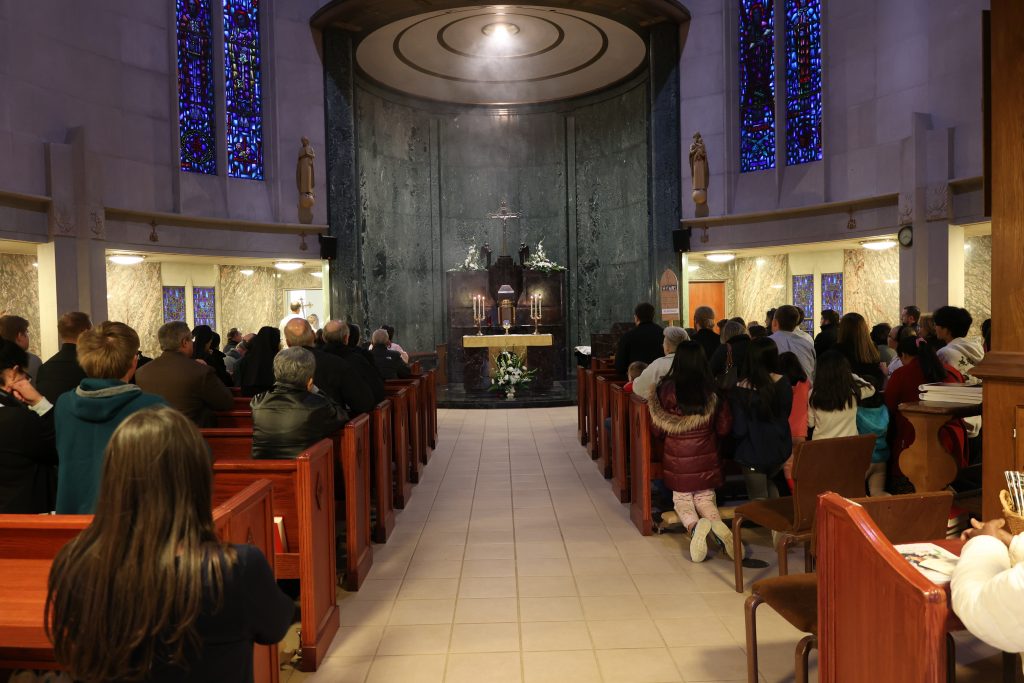 Photos by Jennifer Barton
After the Holy Thursday Mass on April 13, worshippers spend time in adoration at the St. Mother Theodore Guérin Chapel at the Cathedral of the Immaculate Conception in Fort Wayne.

At each stop they made, the two men took turns reading a passage before entering the church, reflecting on Jesus’ last day on earth. During one of these, the two men did not have a specific passage prepared, so Platt read Psalm 22, “The Prayer of an Innocent Person,” which proved fitting for their spiritual journey. Bergeron commented, “As he read, I pondered how the Holy Spirit brought the Old and New Testaments together.” For five of the parishes visited, Bergeron also prayed a decade of the rosary.

The two men began with Holy Thursday Mass at the cathedral, where they sang in the choir. Bergeron described his love for that particular ceremony. “Since I was a child, I have found this liturgy – with its stripping of the altar and removing all its sacramentals – and then the time of prayer and adoration – unique, memorable and blessed,” he said.

Blessed the evening certainly was. From the St. Mother Theodore Guérin Chapel at the cathedral, the two men ventured to six other churches in the southern part of the City of Fort Wayne: St. Peter, Sacred Heart, St. Henry, St. Therese, St. John the Baptist and St. Patrick. 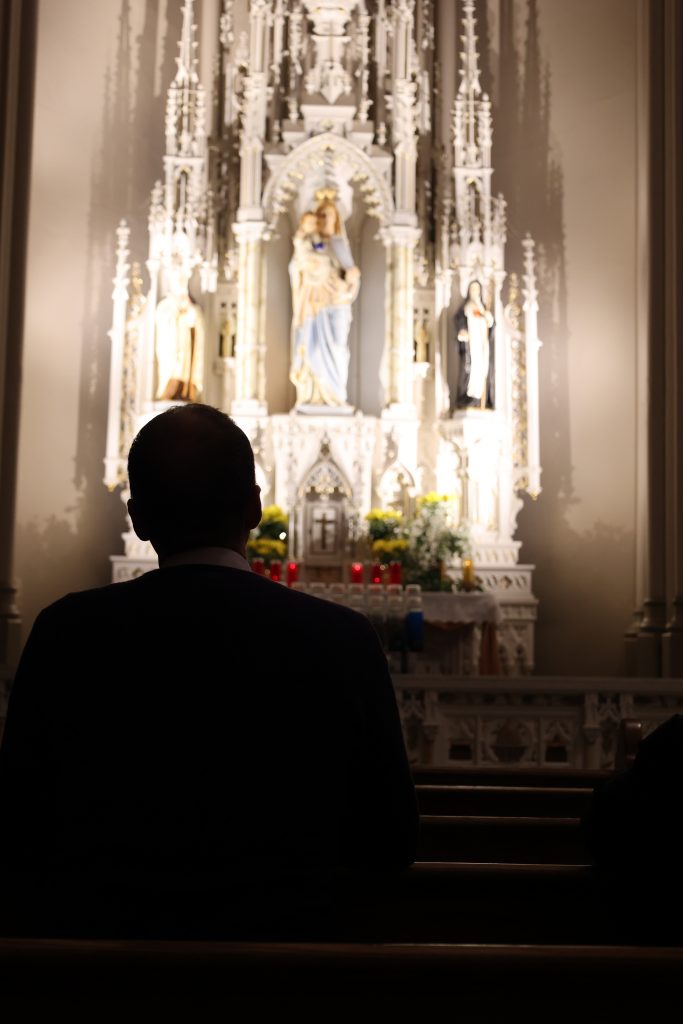 Dave Bergeron and Joe Platt, members of the Cathedral of the Immaculate Conception, visited seven churches in the nearby area, one of which was the beautiful St. Peter, to spend Holy Thursday in adoration.

Outside of St. Peter – their first actual stop – they were met by none other than the pastor himself, Father Patrick Hake, in traditional cassock and biretta, who warmly welcomed them to his beautiful church and asked them about their route. Bergeron described the church as “breathtaking” and “the perfect start for us … to begin our Holy Thursday journey of prayer and adoration.”

Each church had its own style for the altar of repose, adorned with candles, flowers or other ornamentation – or none at all. The fragrance of incense lingered in some of the churches while beeswax scent infused others. Some were bathed in silence, some resounded with prayerful voices, particularly St. Henry, where worshippers recited the rosary and sang in Spanish. 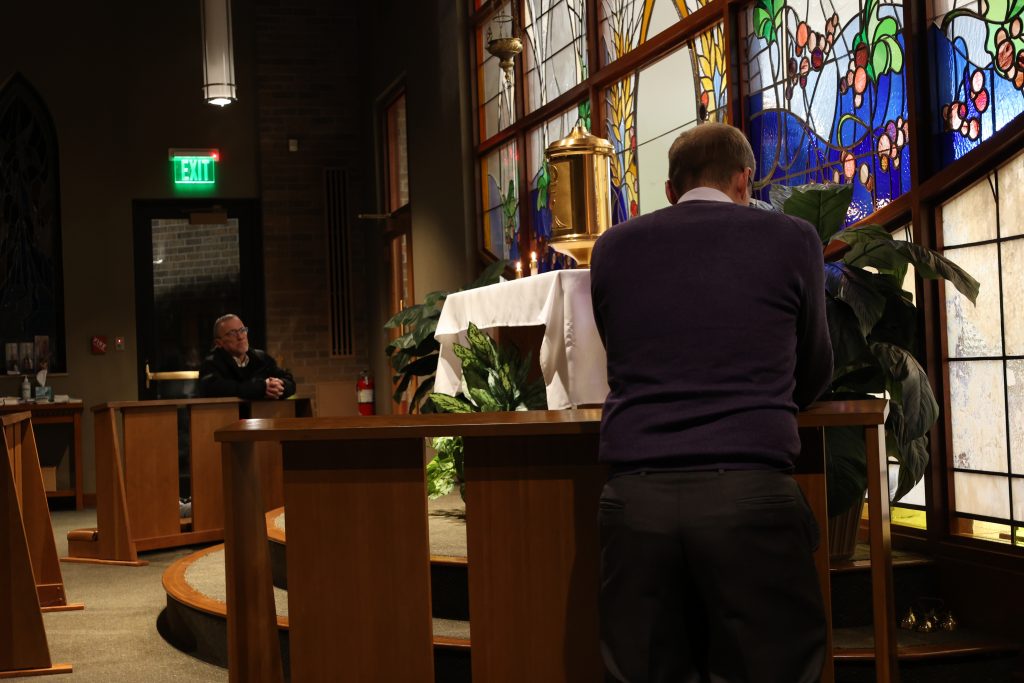 Bergeron and Platt are seen on opposite sides of the tabernacle at St. Therese Church, where the altar of repose was set up in the chapel behind the sanctuary.

Last year, they had experienced something similar at St. Patrick, a parish with a high concentration of Vietnamese Catholics. Beregon had attended 4-8 grade in the now-closed school, so stepping into the classroom-turned-chapel was a unique experience. He said that last year he and Platt had left that chapel in silence, “not being able to speak about the beauty and devotion – in a language we literally didn’t understand but in our hearts totally understood.”

The time spent at St. Henry, according to Bergeron, was the highlight of his evening. He said, “This time, it was our Hispanic brethren, praying what I instantly knew was the rosary in the darkened makeshift chapel, the only light in the room coming from the candles adorning the tabernacle. I fell freely into the rhythm of the rosary as I said my decade. Upon leaving, I was heartened by the depth of devotion at all of the churches and the strong return from the COVID restrictions that had taken all of that from us.”

Throughout the evening, Bergeron was amazed at the numbers of families spending time in adoration together and the young adults he saw at various churches, hopefully doing the same thing he and Platt were doing. They also saw two religious sisters at many of the same churches they visited. At a couple of the parishes, he saw parish priests keeping watch with Jesus.

Whether adorers knelt on the floor before Him or sat in prayerful silence, all had come with a single-minded purpose – as Bergeron stated: “we knew we had completed another pilgrimage not just for its own sake, or as some perfunctory mission, to spend time with our Lord and with all those others doing the same.”