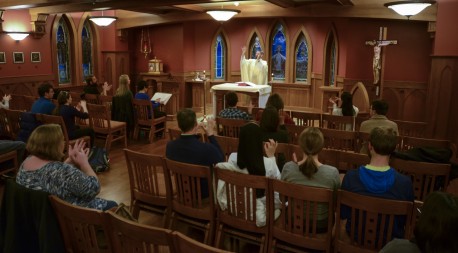 Father Christopher Klusman, a deaf priest from the Archdiocese of Milwaukee, signs during an all-ASL Mass at Notre Dame on Nov. 9.

NOTRE DAME — Nov. 9, 2016, is a day Kevin Haggenjos will never forget. Thrilled to be part of the first Mass to be celebrated by a deaf priest in American Sign Language at Notre Dame, Haggenjos said, “I was born and raised in South Bend. As a deaf Catholic, I have dreamt all my life that there would be a Mass in ASL here. Today, my dream came true.”

Sponsored by the McGrath Institute for Church Life’s Office of Human Dignity and Life Initiatives, the Mass at Geddes Hall on the University of Notre Dame campus was part of a larger event featuring a lecture on deaf Catholic history.

For many deaf Catholics like Haggenjos, celebrating Mass in their native language, ASL, is a rare and much-treasured gift: so much so that a number of deaf Catholics drove from Chicago and Indianapolis to attend.

“When there is a deaf priest, I have a direct connection to the priest and the liturgical action. Homilies are interactive. Interpreters may miss parts of the homily and Mass, but when a priest signs, I know I’m not missing anything,” Haggenjos said.

ASL is the first language of Father Christopher Klusman, a priest from the Archdiocese of Milwaukee. In his homily, Father Klusman explained that like many other minority groups, deaf culture has its own unique language, tradition, history and art. Among the culturally deaf, deafness is not understood as an impairment but as part of human diversity.

Father Klusman related that when people he meets find out he is deaf, they say to him in a tragic voice, “Oh, I’m so sorry!” They are surprised when he responds, “But why? Deafness is a gift from God. Without it, I would not have known the beautiful language of ASL and deaf culture!”

On the feast of the Dedication of the Lateran Basilica in Rome, Father Klusman said that while a church is the house of God, it is only a house of God because it houses the people of God in whom the Spirit dwells. Stressing that both deaf and hearing are made in the image of God, he encouraged the faithful to decorate and adorn one another’s house of God by sharing the gifts they have with each other.

After Communion, Noah Buchholz, a deaf poet, actor and assistant professor of deaf studies and ASL at Bethel College, led an ASL hymn of praise. The hymn was a dramatic interpretation of the creation story from Chapter 1 of Genesis, rendered as a performance through body movement, ASL hand shapes and visual rhythm, a theatrical form of sacred art. The congregation participated in the hymn by signing a refrain of praise after each day of creation was depicted.

Because the entire Mass was in ASL, a voice interpreter was present to accommodate those who did not know the language. Urged on by Father Klusman, the congregation signed the Mass responses as best as they could, just as a non-Spanish speaker might participate at a Spanish Mass.

It was the first time Jessica Keating, director of the Office of Human Dignity and Life Initiatives, a hearing person and one of the organizers of the event, had been to a Mass in ASL. “The liturgy was profoundly moving because of the aesthetics of the language,” she said. “In a time when our communication is often disembodied, the embodiment of ASL, the need to look at the person before you, struck me as a great gift to the Church, a gift that might help us recover a deep sense of human dignity.” Grateful for the experience, she expressed interest to learn ASL and a desire for Notre Dame to host more liturgical services and events for the deaf community.

Following Mass was a lecture by Dr. Marlana Portolano, professor of rhetoric at Towson University in Baltimore. Her lecture featured a chapter from her forthcoming book on deaf Catholic history, and related the history of Abbé Charles La Fonta, the first documented case of a born-deaf man who became a priest.

Abbé La Fonta was ordained in 1921 after many years of battling prejudices that French society held concerning deafness and religious ritual, but was allowed only to celebrate Mass privately. Nevertheless, he worked tirelessly to bring the gospel to the deaf community, especially deaf children.

In 1924, Abbé La Fonta obtained permission to receive the confessions of deaf people in their own language. Being able to participate in the sacrament of reconciliation was momentous for many deaf people, as they were not able to receive the Eucharist without it.

While Abbé La Fonta died prematurely in 1929 at age 51, his life and ministry undoubtedly opened a path to ordination for other deaf priests like Father Klusman.

“I am so grateful for Lana’s talk. I never knew who the first deaf priest was until today. This is huge,” he shared, noting the importance of deaf Catholic history not only for the deaf Catholic community, but the universal Church.