Gardening is often a solitary pursuit, but at St. Henry Parish in Fort Wayne, a community garden has a different mode of operation. Its most impressive harvest is not the bushels of vegetables the growers take back to their tables, but the fellowship that they share with each other.

Nearly 10 years after its inception, the garden has become a unifying spot in the ethnically diverse neighborhood. Gardeners from 15 different countries, including Mexico, Nigeria, China, Cambodia and Guatemala, are represented in the planting spaces on the 2-acre property.

While feeding their physical needs, the gardeners are feeding their spiritual needs as well. They have different backgrounds, ethnic roots and even different tastes for the food they grow, but they all have in common a generous nature. 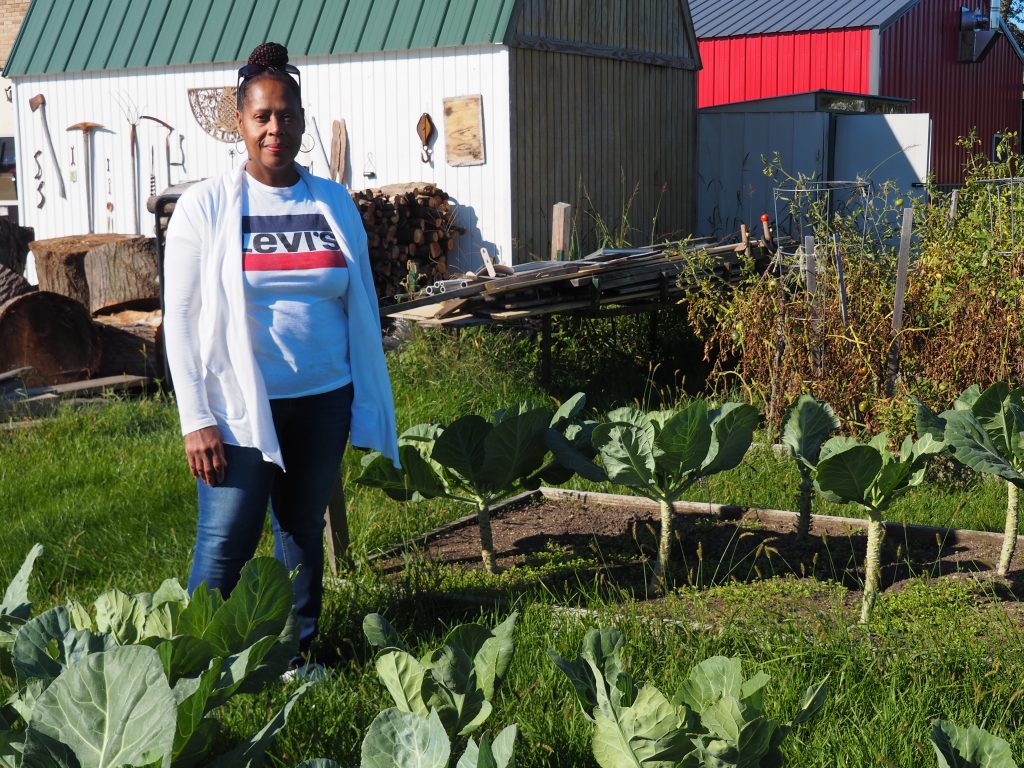 Colleen Washington shares the turnip and collard greens that she grows with her family members and friends, who are thankful when she arrives with her harvest, she said. She also noted that any excess produce can be placed on a nearby table for anyone to help themselves to.

Washington has been tending her garden boxes at St. Henry for around five years. In previous years, she had planted 22 boxes. This year, she is down to 16.

“St. Henry’s has given us the opportunity to come down and pick as many boxes as we’d like,” she said. “The only thing we have to do is bring our seeds; they donate the water.” 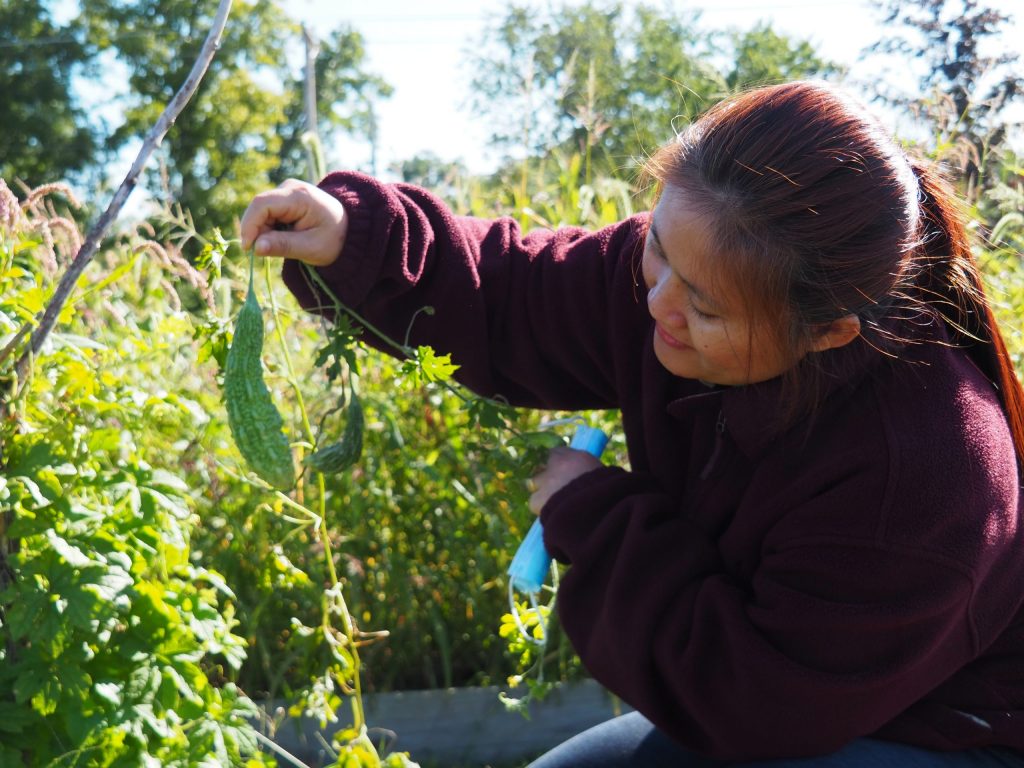 Htoo and Karey Khu have been coming to St. Henry Community Garden to grow their own produce for about five years as well. Natives of Thailand, the family migrated to the area 11 years ago.

In their garden boxes, Karey explained that they grow many of the Asian vegetables they are familiar with but have a difficult time finding in America. “We keep the seeds for next year. Like sticky corn — you can’t find in the store. I’m trying to do that because my family loves to eat that kind.” 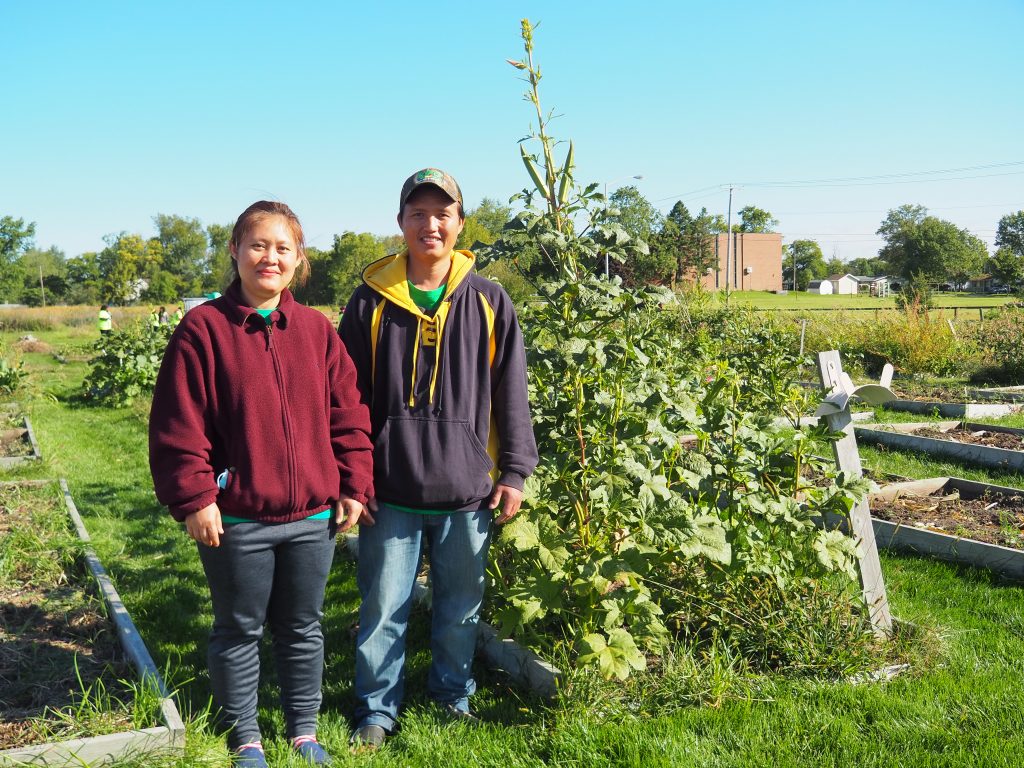 Karey and Htoo Khu stand by their family garden boxes in the St. Henry Community Garden in Fort Wayne.

Their three children benefit from time spent in the garden as well. “Just yesterday we come and cleaned out the old things,” Karey said.

Splitting their time between two jobs and raising children can be difficult, but Htoo sees the benefit of “teaching my kids how to garden, how to grow things in the garden,” he said.

Even with their busy lives, Karey said that gardening is so enjoyable that she never feels tired working in the soil. 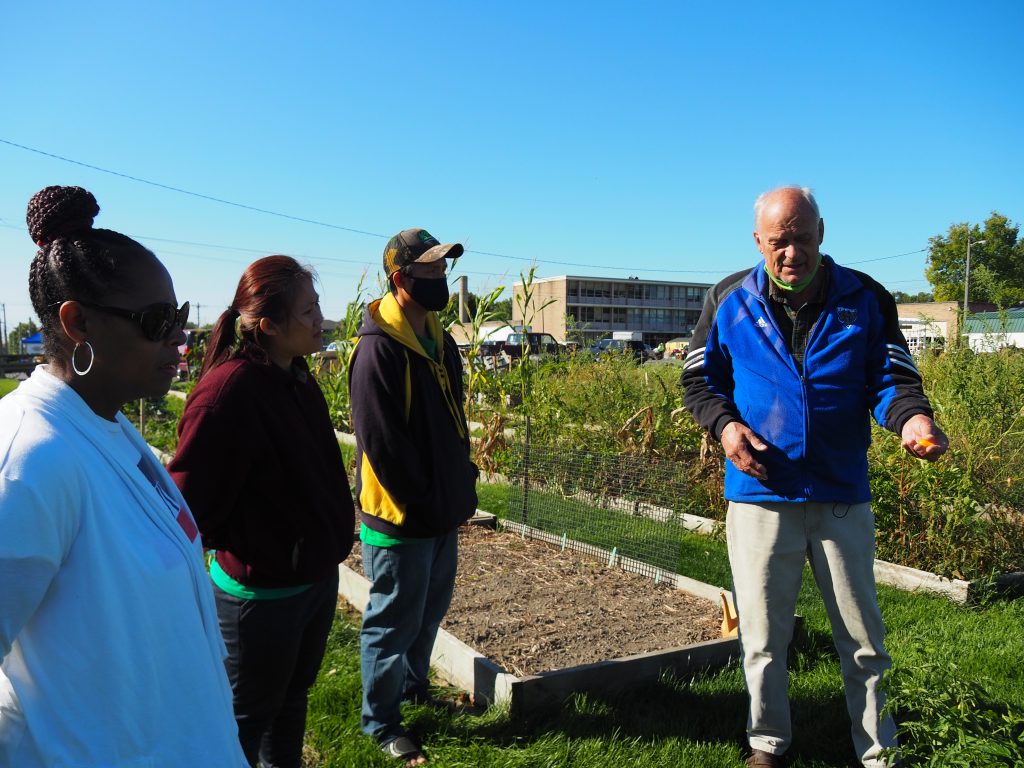 Ray Converset is a parishioner at St. Therese, a short drive from St. Henry. The parishes have a connection, as Father Matthew Coonan now serves as pastor for both. Converset has been utilizing the garden at St. Henry for around seven years, and he generously donates much of his excess crop to the food pantry at St. Therese.

“I found out early on that you couldn’t consume everything, so it’s pick and go to the table and try to give some away. I also have several African families that I donate food to, and I just have to keep harvesting and keep it in mind to give it away. I still have plenty for myself.” 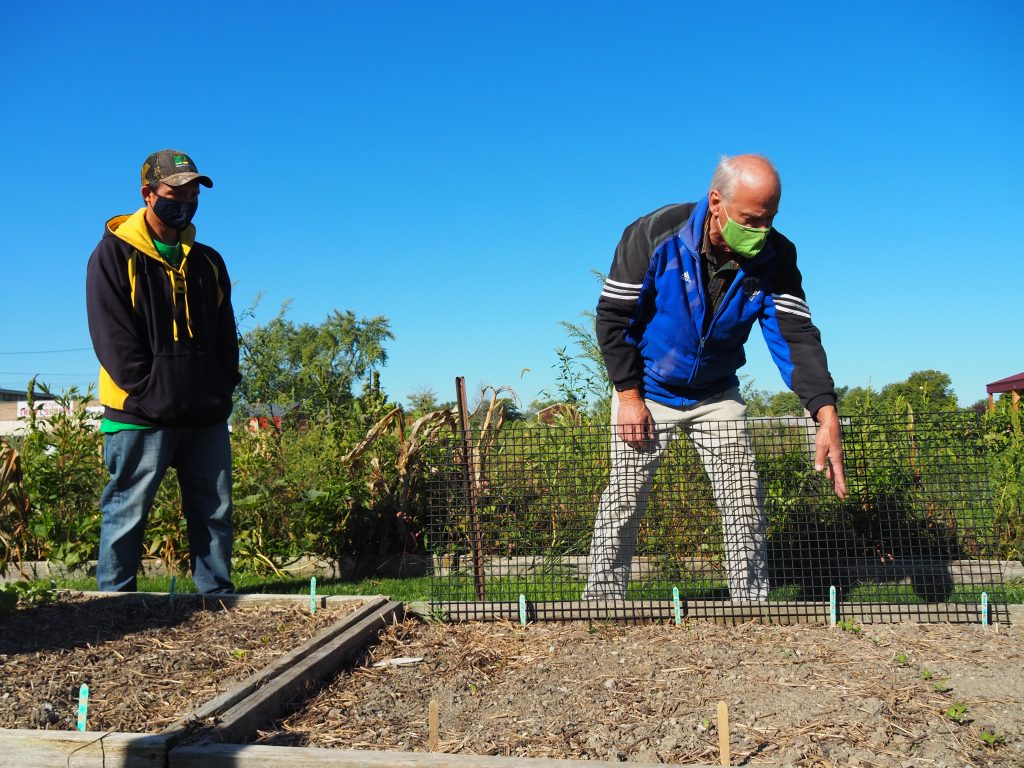 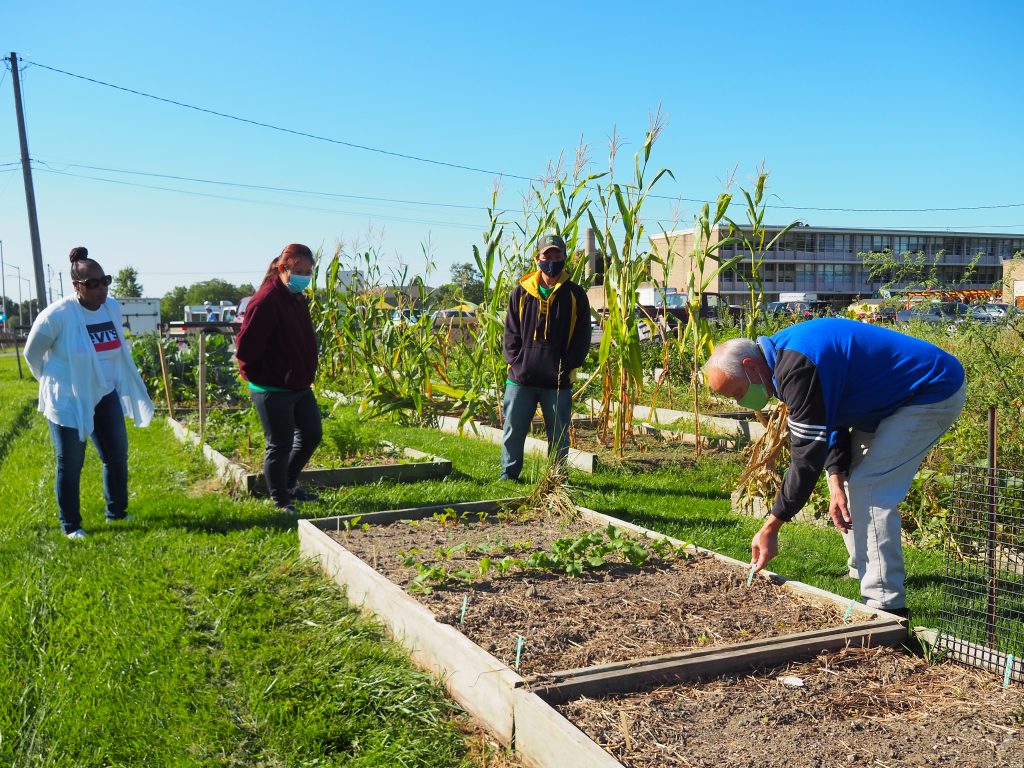 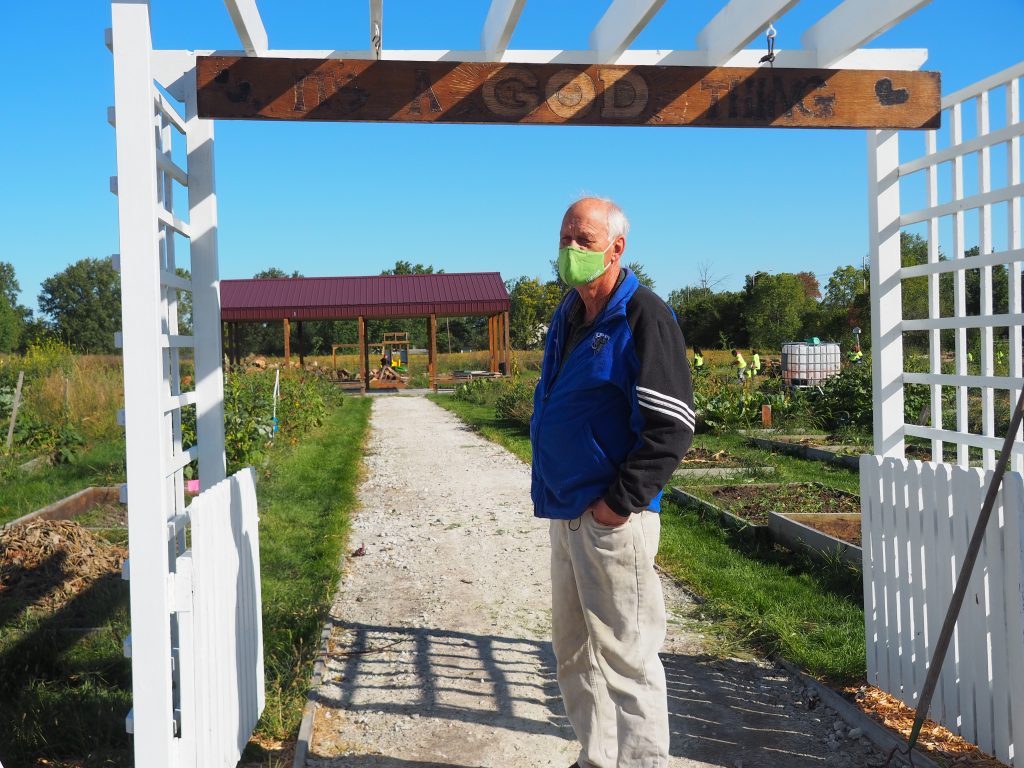 Though Converset doesn’t live in the area immediately surrounding St. Henry Parish, he treasures meeting people from different cultures who come into the garden.

“It’s great to mix and mingle with other people and get their ideas and see what they do: It’s fun to come down and meet a lot of the other people. It gets you out of your little neighborhood.”

Aside from sharing food, the gardeners also share tips on growing various plants. Converset showed his fall garden to the others, demonstrating what he has been able to grow later in the season. “Being out here, it’s kind of a learning experience,” he explained. “You see somebody doing something, and you ask. Everybody’s friendly.”

Htoo and Karey became involved when they saw people working in the garden from their home across the street. They had started patronizing the thrift store at St. Henry, so it was a small step to asking the grounds manager, Paul Gerardot, for a gardening plot.

The family told another friend about the garden, and now that friend grows boxes of chili peppers to last all winter.

“That’s a great example of the communication with even different cultures or different kinds of people. If they’re interested, we explain how we do it here. It’s helpful for them, too,” Karey stated.

St. Henry provides something that most of the houses in the area cannot give residents — space. The space to grow fresh food to supplement their tables and reduce their grocery bills. Washington has three children for whom she makes homemade spaghetti sauce and salsa from her yearly crops. “They won’t eat sauce from the store anymore, they want my homemade sauce,” she said with a laugh.

“It’s self-assuring because you did it yourself — you grew that. And my family’s happy. They see the hard work I put in and they appreciate it.” Washington appreciates the parish for allowing her to use the space.

Other elements of gardening also rivals the food it puts on the table. The benefits of fresh air and time away are proven stress-relievers. Karey said, “It’s stressful, from jobs, and coming here is relaxing to us.”

Washington agreed. “I come down here for relaxation. Good for mind, body and soul. This is my peace.”

COVID-19 has changed the population of the garden this year. Gerardot stated that most years every box is full, but this year saw many vacant growing spaces.

Washington remarked, “I just hope that the community will come back and participate. I don’t know how it’s going to pan out next year, but I’ll be here.”

Converset and the Khu family are in accord with that sentiment. As long as St. Henry provides the space, they intend to continue growing their crops and their friendships.