Christmastime joys – portrayed in the picture-perfect nostalgia of Norman Rockwell paintings, where families gather at grandma’s house for dinner and delectable desserts. The Leffers family, with their Christmas tradition of making gingerbread houses for the Festival of Gingerbread in Fort Wayne, could have been the subjects of one of these paintings. This year, the Catholic family created an award-winning reproduction of the Cathedral of the Immaculate Conception in gingerbread form.

It started five years ago. Mackenzie Nees decided she wanted to make a gingerbread house to enter in the competition. The first year, her parents Jason and Stephanie aided her, then “happily transferred to Grandma,” Jason commented. Two years later, her cousin Ellie Short decided that she wanted to get in on the fun as well. 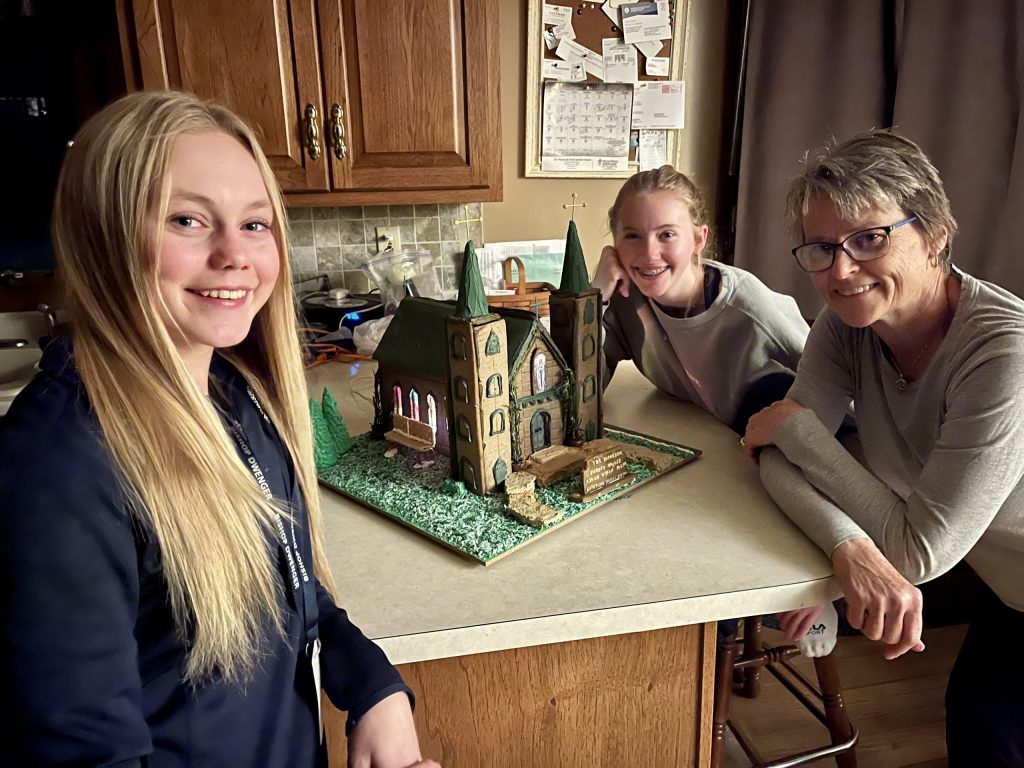 Provided by Jason Nees
Cousins Mackenzie Nees and Ellie Short, along with assistance from their grandmother, Peggy Leffers, create gingerbread works of art for the Festival of Gingerbread in Fort Wayne. This year, the Bishop Dwenger High School freshmen constructed the Cathedral of the Immaculate Conception, winning first place in their category.

For the last several years, Peggy Leffers has turned her kitchen into a winter wonderland of flour and powdered sugar – the aspect of Christmas preparation that Rockwell did not depict in his paintings – for her two granddaughters, now freshmen at Bishop Dwenger High School, to bake and decorate their gingerbread creations. The cousins have always had a close relationship. Born less than a month apart, “we kind of grew up as sisters,” Ellie shared. The pair even attended the same grade school – St. Vincent de Paul – though they rarely were in the same classes.

For previous years’ festival entries, the pair replicated Salomon Farm, a park in Fort Wayne; another time it was a Nativity scene “which we may or may not have been hot-glued together,” Mackenzie said, and last year replicated a local iconic train station. Generally, they pick their designs based on local historic buildings, ones that seem possible to make. Leffers said that “Mackenzie wanted to do the cathedral this year.” 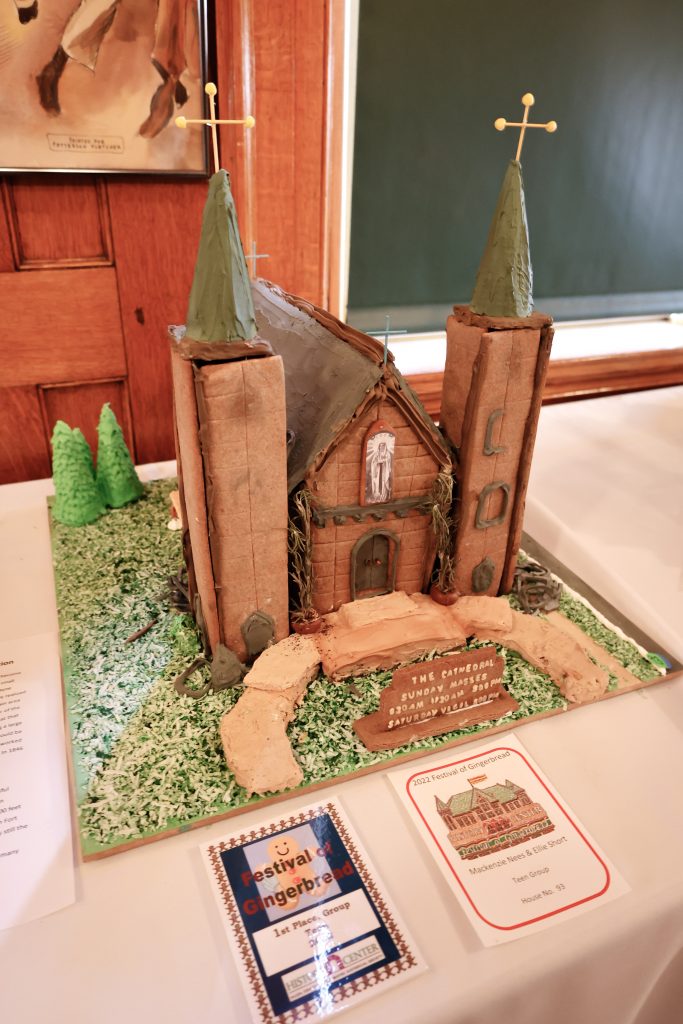 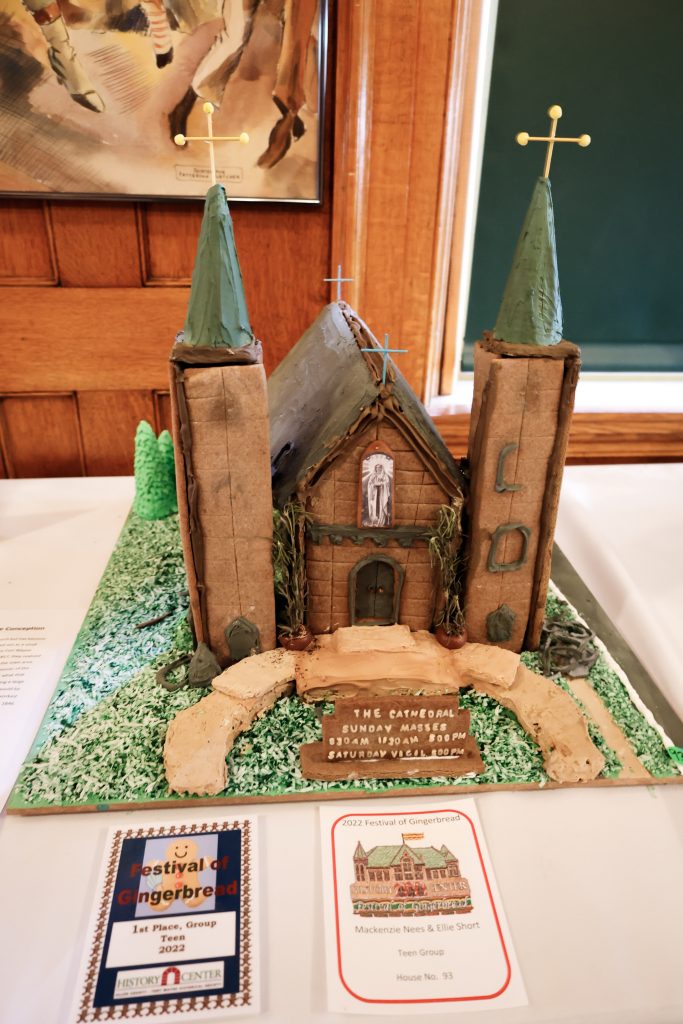 When asked why she chose the cathedral, Mackenzie said, “We’re obviously all Catholic and it was a cool downtown building that has a lot of meaning.” Neither of the young ladies can recall being inside the cathedral, though they have seen the exterior and Leffers has attended Christmas Eve Mass there in the past.

Mackenzie learned a great deal about the more-than-150-year-old church when writing the essay that goes along with historic festival entries. “I didn’t realize it started off as a different building than the original,” she stated. “There was a priest there who ended up raising money and they were able to build their now cathedral. It’s cool that it started off as a small thing, not too many people, then was built bigger.”

The three agree that every year is a learning experience and this time, the girls learned how to make stained-glass windows for the gingerbread Cathedral of the Immaculate Conception using crushed Jolly Rancher candies.

This was the third year they placed in the competition, taking first place in the teen group category. In previous years, they had placed third and first.

But winning is not why they enter the contest. “It teaches you humility if you go in thinking you’re going to win,” Leffers stated. “You may be disappointed. You just go for the fun.”

Creating something so detailed is difficult but gives the family many hours of enjoyment and togetherness. The trio estimates that they put in somewhere close to 15-20 hours of man-hours and seven or eight batches of frosting into one creation. Leffers even bought a kit for one of her grandsons, which “kept him entertained for about five hours.”

Through the example of the older girls, Mackenzie’s younger sister Scarlett Nees and Ellie’s younger brother Tate Short have begun their own tradition of making gingerbread houses together.

Leffers admits that baking is not among her list of hobbies prior to her granddaughters’ interest in gingerbread houses, and gingerbread is about the only Christmas baking she does. Aside from handling the baking aspects and taking an advisory and supervisory role in the construction, she offers minimal help, allowing the girls’ creativity to shine. She also has the unenviable task of cleaning up afterwards, but “I don’t let that bother me. It’s not a deterrent.”

After all, she is able to spend time with her granddaughters, whom she said “are a blessing.”

The girls greatly value their grandmother, as well. “She’s awesome,” Ellie said. “We probably wouldn’t be able to do half the stuff without her.”

“We would have a broken gingerbread house and we would have cried at least twice,” Mackenzie added, laughing.

After assembly is completed, it is Jason’s job to drive the girls’ entry – very carefully – to the History Center in downtown Fort Wayne where the colorful creations go on display from late November until Dec. 18. After the exhibit closes, the gingerbread cathedral will be moved to the Diocesan Museum directly next door to its life-sized counterpart to be put on display for the remainder of the Christmas season.

Interestingly, Leffers was born on Christmas Day, so the family has an extra-special reason to enjoy their favorite traditions, which include a family breakfast of biscuits and gravy to celebrate her birthday and a large gathering for Christmas “anytime we can have a nice space of time we can be together and everyone can be there,” Leffers remarked.

The cousins plan to continue their gingerbread tradition for as long as possible among changing and often-busy schedules, but Grandma Leffers awaits the day they reach adulthood, when she will gleefully hand the process over to them.