There is an almost childlike quality to Patti Hagadorn, the sort that Jesus said is needed to enter the kingdom of heaven. In her mind, there are no strangers, only new friends. She loves ice cream cones, laughs at her own failings and talks to God throughout her day.

Even her voice sounds childlike, a soft quality like the tinkling of bells. And she thanks God for every day that she recognizes herself and family members.

Hagadorn has early onset dementia. She tells nearly everyone she meets about it and occasionally writes columns for the local papers, finding humor in her circumstances. Though she loves Christmas and has fond memories of presents she has received, no gift has ever compared to the fulfilment of her childhood wish – joining the Catholic Church.

As a child, she became fascinated with reading the Bible and all things Catholic after her father photographed the ordination of Father Richard Hire in 1970. She even thought to become a religious sister one day, but her family was Nazarene and frowned upon her interest.

“So, I was kind of a closet Bible reader when I lived at home,” she remarked. 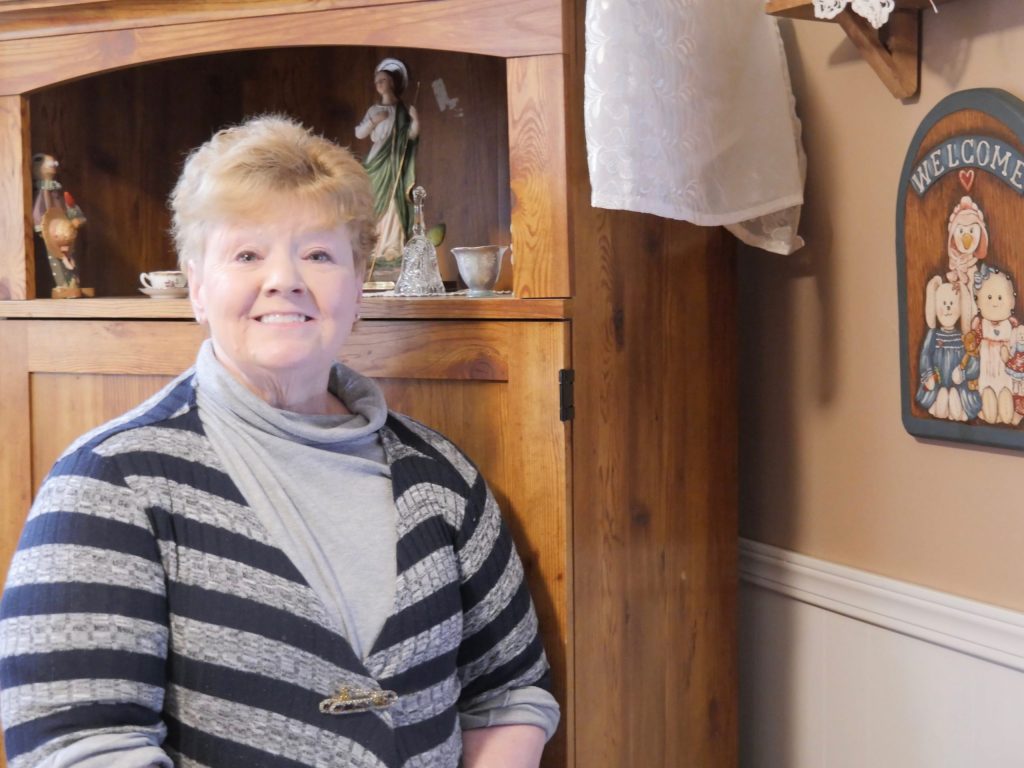 St. Therese parishioner Patti Hagadorn of Fort Wayne said she feels fulfilled since receiving the sacraments of initiation in the Church several years ago. The joy she radiates outshines the debilitating medical diagnosis she has received.

For years afterwards, she and the love of her life, her husband Jim, attended various denominations. At the Nazarene church where they spent 20 years, Hagadorn recalled the lackadaisical way communion was approached – crackers thrown on a gold plate and grape juice tossed into glasses. She said, “I felt uncomfortable about it, and I couldn’t figure out why.”

They left the Nazarene church and church-hopped for probably two years before she received the dreaded diagnosis of early onset dementia in her 50s. Patti prayed for a sign from God about where she belonged. Driving past St. Therese Parish one day, she told Jim to pull in because she was going to become Catholic. 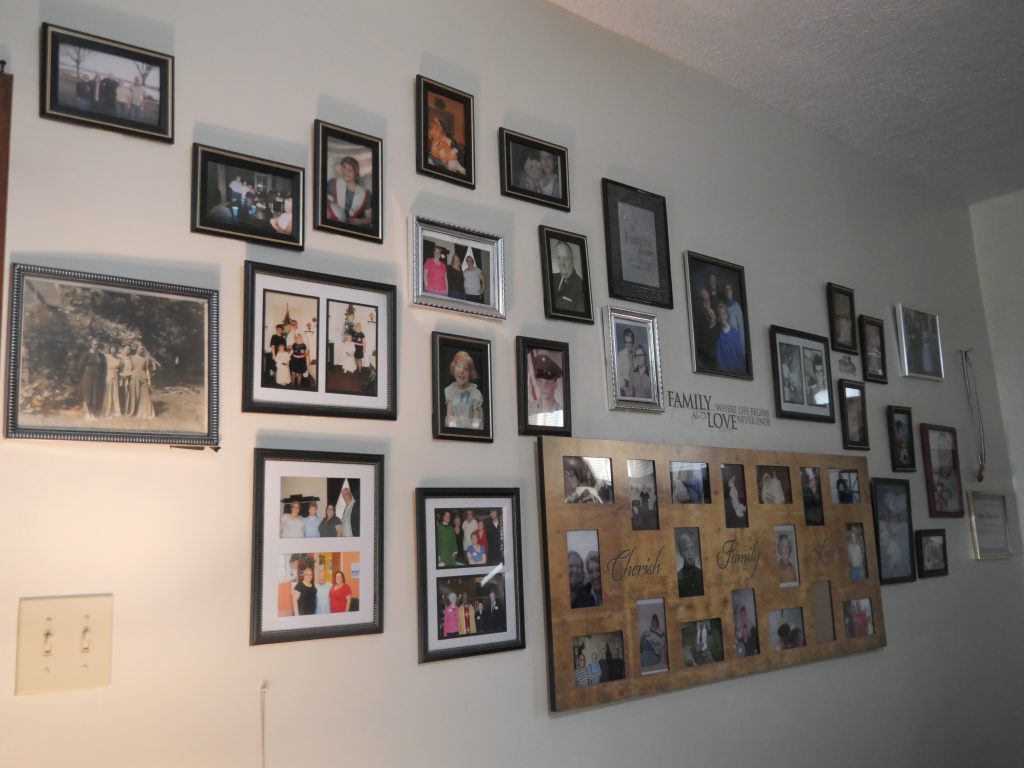 Thomas’s most poignant memory of the Rite of Christian Initiation process was watching the four members, including Hagadorn, being confirmed by Father David Ruppert. Watching from the back of the church, Thomas said of that night, “The only thing I could see was Father Dave, and the emotion on his face. It’s one of those memories that I’ll never forget.”

Hagadorn has not forgotten it either. She recalls with perfect clarity the moment when, spontaneously, she and the three other candidates reached for each other’s hands and began weeping with joy.

“Patti is capable of such love for others. It was apparent in class, the gentle love she shared throughout RCIA,” Thomas said.

After she became part of the parish, Patti continued to spread love to others around her. She became a greeter at Mass and joined the Blessing Bees ministry, bringing smiles to those who walked through the doors of St. Therese.

Her prayers also led her husband into the Church. During those early days as a Catholic, Jim dropped her off at St. Therese each Sunday for Mass and picked her back up afterward.

He insisted he would never join her in the Catholic faith. But one morning, Patti responded to an urging from the Holy Spirit and asked if he would come to Mass with her.

“He came in, he came the next Sunday, he came the Sunday after that. The next thing you know, my husband’s in RCIA. And the same thing happened to my daughter Amy,” Patti shared.

“Her faith and love for the Church is beyond what many appreciate in the gift of their faith,” Thomas commented. “Everybody should know Patti Hagadorn.”

And many people do know her. Patti has what she calls a “bad habit of picking up friends everywhere I go,” so much so that when she hosted her Christmas party, her house would be so full that some guests would have to leave in order for others to enter.

Christmas has always been special to her, but one year stands out. It involved her daughter Amy.

A car accident in the 1970s left Patti with seizure disorder, and throughout her second pregnancy, she suffered from so many seizures that she had to be hospitalized. Medical personnel expected her unborn child to be born with severe health conditions, and her doctor asked if she wanted to “cancel” her pregnancy.

“I remember crying, and I threw him out of the room,” she stated, telling him, “I love this baby, I love my little girl.”

Patti didn’t care about the possible health effects and carried Amy Jo to term. “She was the baby God gave us.”

Born with cerebral palsy, Amy experienced severe bullying in the third grade. She became famous when, in 1993, radio station WLDE 101.7 ran a “Letters to Santa” contest in which her Christmas request of having one day without being made fun of was picked up by news outlets throughout the country.

Amy’s letter also launched discussions in schools and communities across the country about how to treat people with disabilities with greater respect. Letters and gifts poured into the Hagadorn household from people all over the country – including many celebrities – who sympathized with Amy’s plight.

The letters meant more to the family than any of the gifts, Patti said. “When you look back on it, if I had ended that pregnancy, the world wouldn’t have known her story. She wouldn’t have had an impact like she did.”

When Amy chose to come into the Catholic Church, Thomas took the time to work with her one-on-one. Patti recalls watching the two of them sitting at the table, studying Catholic books for children to help Amy understand Church teaching. Patti was so pleased that the last act that former pastor Father Ruppert performed at St. Therese was to welcome Amy into the Church.

Though her memories may fade and her mind might fail her, nothing can take away Patti’s childlike enthusiasm for Christ, particularly in the Eucharist. She said, “Once you get into the Catholic Church, this is the way every Mass should be. So reverent to God. … The first time (receiving Communion), I can’t describe what it was like for me. It was just, ‘this is it; this is where I should have been a long time ago.’”