Across Indiana, educators and school choice advocates are spreading the word: A Catholic or other nonpublic-school education is now within financial reach for most Hoosier families seeking it for their children.

Sweeping changes to Indiana’s Choice Scholarship Program, more commonly known as the voucher program, passed the state legislature earlier this year, which extended eligibility to middle- and upper-middle-class families and significantly increased the scholarship amount that all qualifying students receive.

“This legislation is transformational,” said John Elcesser, executive director of the Indiana Non-Public Education Association, which represents the state’s more than 400 non-public schools, including Indiana’s 175 Catholic schools. “We had always done a pretty good job of taking care of the families that needed the most assistance financially. But we found through the years that families who were really struggling were the middle-income families who had not been able to get support, especially those with multiple school-age children.

“That was the crux of this year’s legislation — the recognition that those families needed help as well,” Elcesser continued. “Now we need to make sure as many families as possible are aware of these new opportunities.”

In all five Catholic dioceses in Indiana, efforts are under way to do just that. From school open houses to communication initiatives at parishes, administrators and advocates are hitting the highlights of the expansion legislation. 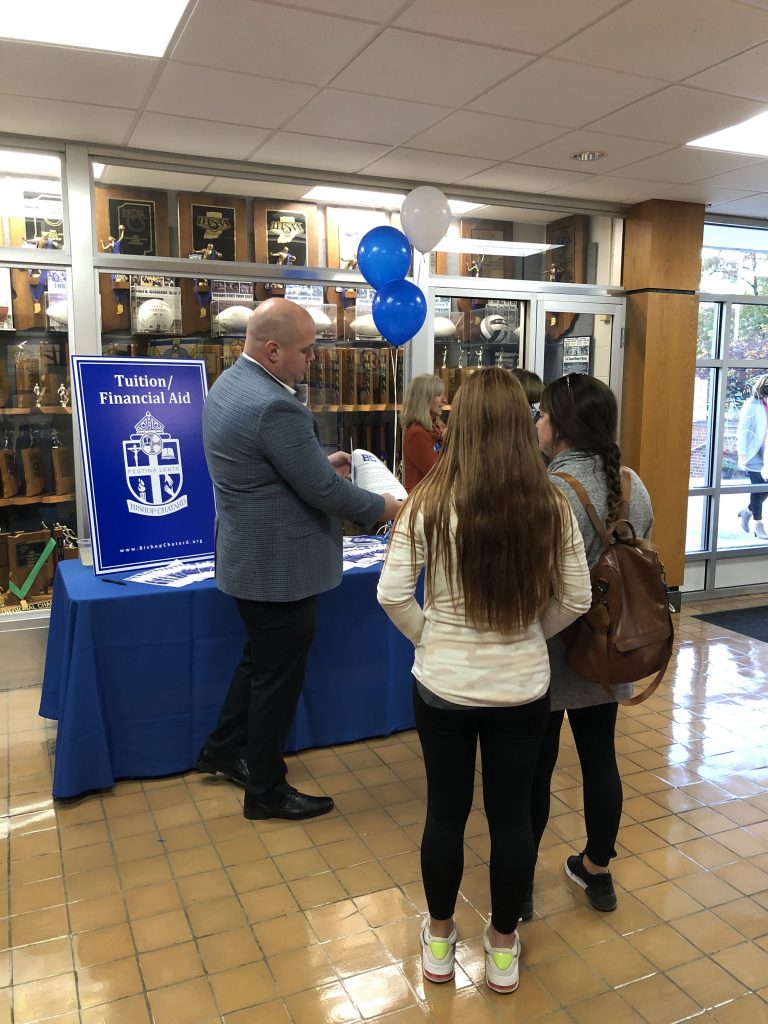 Eight out of 10 families in Indiana now qualify for a Choice Scholarship, or voucher, for their child to attend the school of their choice. Prior to the passage of this year’s legislation, eligibility for vouchers stood at a maximum family income of 150 percent of the federal Free and Reduced Lunch program. Now that threshold has jumped to 300 percent.

Moreover, those who qualify now are eligible to receive a greater amount to help cover the cost of tuition at a nonpublic school. Before the expansion legislation was passed in April, the Choice Scholarship program operated under three tiers. Based on family income, students received vouchers of either 50, 70 or 90 percent of state tuition support — that is, the percentage of the total amount of money Indiana would spend to educate those students at their local public school. Now, all eligible students will receive a 90 percent voucher.

“The extra financial assistance provided by this program is a game-changer for many of our families,” said Kelly Lucas, director of marketing and enrollment management at Bishop Chatard High School in Indianapolis. 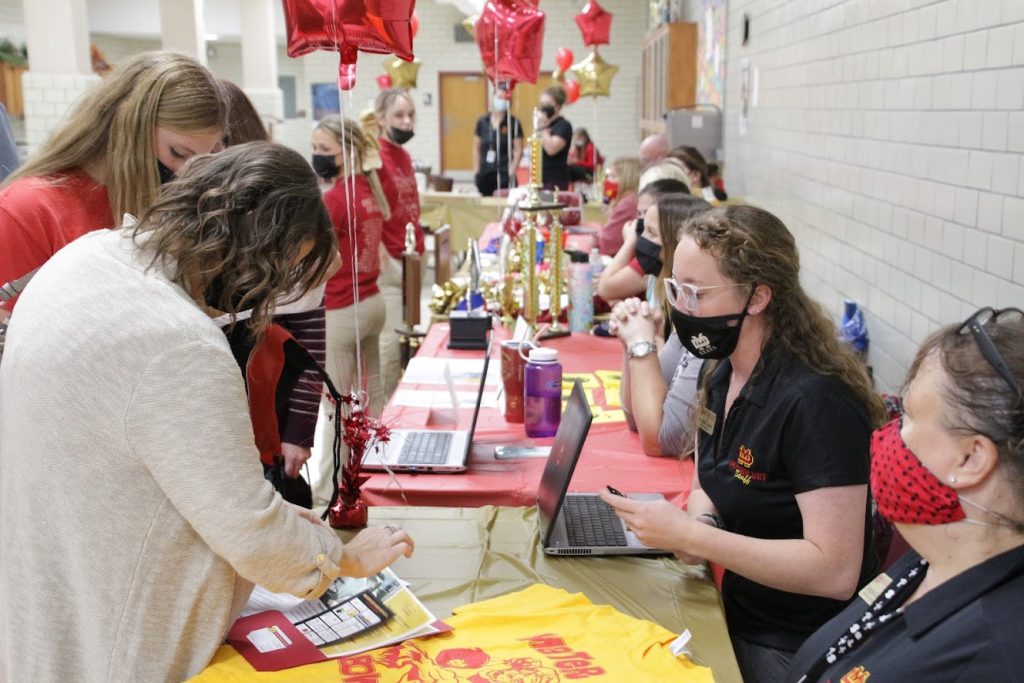 Provided by Tim Lilley/Courtesy of The Message
Mater Dei High School in Evansville holds an open house Nov. 4. The Indiana Choice Scholarship passed the state legislature earlier this year and extended eligibility to middle- and upper-middle-class families and significantly increased the scholarship amount that all qualifying students receive to attend Catholic schools.

During both an open house and a financial aid night held this month, administrators at the high school for the north deanery of Indianapolis welcomed prospective new families and outlined the new opportunities presented by the school choice expansion. As is the case at many schools throughout the state, leaders there are working on messaging to erase the stigma sometimes associated with the program, including downplaying the term “voucher” in favor of “Choice Scholarship” or “grant.”

“We know there are still some families out there that have some hesitation about the program,” said Dan Thompson, director of business operations at Bishop Chatard. “Parents will tell us they don’t want to take away from families that have a greater need. Some people still don’t fully understand that it’s their tax dollars going back to work for them. So there is definitely a learning curve.”

Bishop Chatard has extended its efforts to educate families about the program to all of its feeder schools – the Catholic elementary schools of the Indianapolis north deanery. The school’s president, Bill Sahm, meets with deanery principals on a monthly basis and has been providing them with templates and marketing materials to share with their respective families since the legislation passed in the spring.

“We started promoting it right away and continue to do everything we can to get the message out,” Sahm said.

The efforts clearly are working there and elsewhere. Statewide, more than 8,000 more students are receiving Choice Scholarships this school year than last, according to INPEA data. In the 2020-21 school year, approximately 36,000 Indiana children were participating in the program. As the 2021-22 school year is now in full swing, nearly 44,000 students are attending Catholic and other non-public schools around the state with the help of Choice Scholarships.

Indiana, which has long been considered a pioneer in school choice, this year marked the 10th anniversary of the Choice Scholarship Program. The INPEA and the Indiana Catholic Conference were key members of the coalition that led to that groundbreaking legislation, signed into law by then-Gov. Mitch Daniels in 2011.

Recently the INPEA honored Indiana House Speaker Todd Huston with its Legislative Leadership Award for his role in passing this year’s expansion legislation, along with his longstanding efforts to promote school choice.

“For so many years, leaders in our state have said we value education, we know the importance of a great school, and we want to give students and families as many options as possible,” said Huston, whose children have attended public schools. “And we’re going to continue to focus on that, recognizing that for the vast majority of our kids in the state of Indiana, public schools are going to be their choice. For others, it’s going to be charters and private schools. It just gets down to the key principle of making sure children are in the school that best meets their needs.”

That message resonates with Catholic school administrators across the state.

“We’re very grateful to the lawmakers in Indiana that they had the fortitude and the foresight to expand this program,” said Dr. Joseph Majchrowicz, superintendent of schools for the Catholic Diocese of Gary. “Catholic education has become much more affordable for all those we serve.”

Now Majchrowicz and his leadership team are working to amplify the message that families in northwest Indiana have new options for their children. They are spurred on not only by the expansion legislation but by a partnership with the Big Shoulders Fund, a Chicago-based organization inspired by Joseph Cardinal Bernardin and founded by business and civic leaders in 1986 to provide support to Catholic schools with demonstrated need. The scholarship-granting institution extended its reach into northwest Indiana in 2019.

The Diocese of Gary and the Big Shoulders Fund of Northwest Indiana have retained the services of a public relations agency to help them craft a campaign to promote the new school choice opportunities.

“Giving families the opportunity to choose the educational institution that’s right for their child is huge, and a lot of families don’t know they have that option,” said Dan Kozlowski, regional director of the Big Shoulders Fund of Northwest Indiana. “That’s the baseline of this campaign.”

At the opposite end of the state, efforts are also under way on multiple fronts to communicate the new opportunities. The Diocese of Evansville has hosted open houses at two of its Catholic high schools, and plans are in place for Take a Tour Tuesday on Nov. 16, when prospective families can visit any of the 26 Catholic schools in the diocese.

“First and foremost, we always want to highlight our Catholic identity and how we form children in the faith, but right behind that has to be affordability,” said Dr. Daryl Hagan, superintendent of schools for the Diocese of Evansville. “In our diocese, the expanded Choice Scholarship Program has been transformational.”

Hagan, who is in his third year of serving as INPEA board president, expresses great hope for the growing reach and impact of school choice in Indiana.

“In looking to the future, 10 years out, it will be exciting to see the benefits to our families and to our communities when we celebrate the 20th anniversary of school choice,” he said. “I think it will be an awesome celebration.”

For more information about the Indiana Choice Scholarship Program and other school choice initiatives, visit inpea.org.