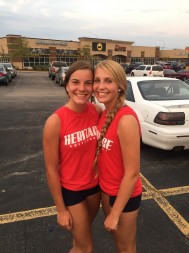 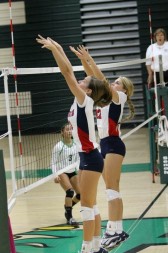 After the loss of seven seniors, 2016 was expected to be a rebuilding year for Heritage; but the longtime friendship between freshmen and former CYO rivals Maggie Castleman (3) and Alivia Beard (12) and familiarity with each other’s play, have been key factors in the young team’s success. Here, the duo block a shot sent by the Bishop Dwenger team.

MONROEVILLE — St. Thomas Aquinas once said, “Friendship is the source of the greatest pleasures, and without friends even the most agreeable pursuits become tedious.”

This quote is telling of the bond between Heritage High School teammates Alivia Beard and Maggie Castleman. The only two freshman on the school’s varsity volleyball team, the girls were at one time rivals when they competed in grade-school Catholic Youth Organization sports. In grade school, Castleman played for the St. Rose/St. Louis Twins and Beard played for St. Joseph Hessen Cassel.

“I always thought Alivia was the nicest player on their team, but I was always intimidated by her in grade school … I couldn’t wait to get to high school to play with her instead of against her,” Castleman commented.

Beard’s opinion of Castleman was similar.

“Honestly, when we were in about the fourth grade, I was always nervous to play Maggie because I knew how talented of a player she was — only to realize later that she may be a beast on the court, but has a super warm heart,” she said.

They became teammates for a limited time, while playing travel league volleyball before their high school careers, which is when their competition transitioned to a friendship. “I will forever cherish and remember the fun and friendly competition between our two rival schools,” Beard reflected.

Not only did the girls compete in the regular CYO season, but also frequently in championship games. Unofficial records show their two schools battled each other in most CYO championships throughout their entire grade school careers, from fourth through eighth grade.

Now, Castleman and Beard, consider themselves “besties;” and perhaps it was about time, as they have older siblings in the same grades and so have known each other for some time. Coincidentally, all four parents are HHS graduates.

This past season, the girls were two of six starters for the varsity team, all of which are former CYO players. And despite the fact that Heritage High School is a public school, the team prays before and after each game.

“I love that our team starts and ends every game with prayer. I know that whatever the outcome of the game is, win or lose, it is God’s plan for us,” Castleman said.

Both girls say they always make it a point to pray on their own as well. “We say a prayer before and after our games and give the glory to God win or lose,” Beard said.

The Heritage varsity volleyball team’s season finished 30-9, winning their conference tournament — for the first time since 2007— and placing as runner-up in the sectional championship