When Steve and Doree Bush, parishioners at St. Elizabeth Ann Seton in Fort Wayne, followed their daughter Jessica into the Catholic Church several years ago, that made three members of their family to enter the fullness of the faith. Not long after, God began working on their oldest son.

“My story’s really crazy,” said Dan. Dan lives in Arizona, is married to a Catholic and has two children, yet he was not a happy man when his incredible tale began. He describes himself as “a taker; I lied, cheated and stole.” Never did he feel a “heavenly accountability” for the way he used people. Yet something began to change inside of him. He said, “There was a moment that I came to realize I wouldn’t go to heaven.”

After that, Dan became depressed. “I was falling apart, hollow spiritually. I felt like I was drowning.” 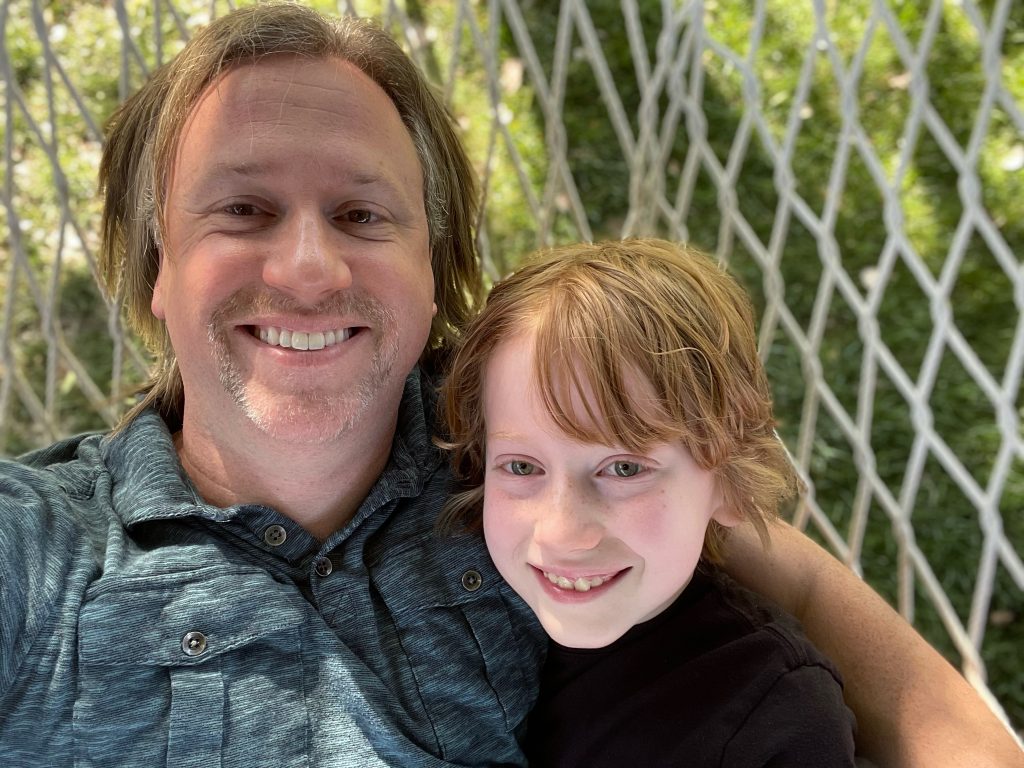 Provided by Doree Bush
Dan Bush, seen here with his young son, received a very powerful message of conversion as well as personal tasks to bring God’s love to others.

Doree told of how she and Steve visited Dan and his family in Arizona periodically, attending Mass with them after she became Catholic. Dan would ask her if she got anything out of it and she responded in the affirmative. “And then he said, ‘I want what you have,’” Doree shared. “So we were just praying for him, and Hollie, his wife, she was praying for him.”

Those prayers came to fruition one day when Dan was driving around and came to a Catholic church where he wanted to pray. “This time I wasn’t praying for selfish reasons. I wanted to get out of my sins.”

Since the church was locked, Dan prayed before the life-sized statue of Our Lady of Guadalupe outside, asking that she intercede for him. Then he stopped at a McDonald’s parking lot and offered his life to God if only God would set him free from his selfishness and despair.

Three days later, Dan remembered rocking his infant son to sleep in the darkened nursery, praying and asking God how He could love such a selfish human being as himself. After laying the baby down, Dan received an utterly divine answer. A sensation came over him as if someone suddenly embraced him from behind and in his heart, he felt the words: “Because I love you.”

The encounter was nearly impossible to describe; it was something too big, too extraordinary for this world. “I felt a bone-crushing love,” he remarked in awe.

Falling to his knees, he could only later say that the paralysis he experienced probably lasted only a matter of seconds, though it felt like hours, and he remembered not breathing. Somehow, he understood it as a father-son kind of love; similar to the instant love he had felt when his first son was born, but thousands of times greater. “It was too much for my physical body to endure.”

Even years later, he remains astonished by those moments. Dan said, “It was like I shed my skin and was reborn. My past was stripped from my body.”

That phenomenon left him desiring the one thing the Catholic Church had that no other denomination could claim – reconciliation. Dan knew he needed to repent of his formerly sinful life and he wanted to do so immediately, but his priest informed him that he had to become Catholic first. Without hesitation, Dan signed up for RCIA.

Dan’s life was completely transformed, but God wasn’t done. He had been called and was about to be sent forth. After that first miraculous encounter, Dan experienced four other astounding events. God chose Dan to be an agent of His love to others in a powerful way through what the Bush family calls “God assignments.” 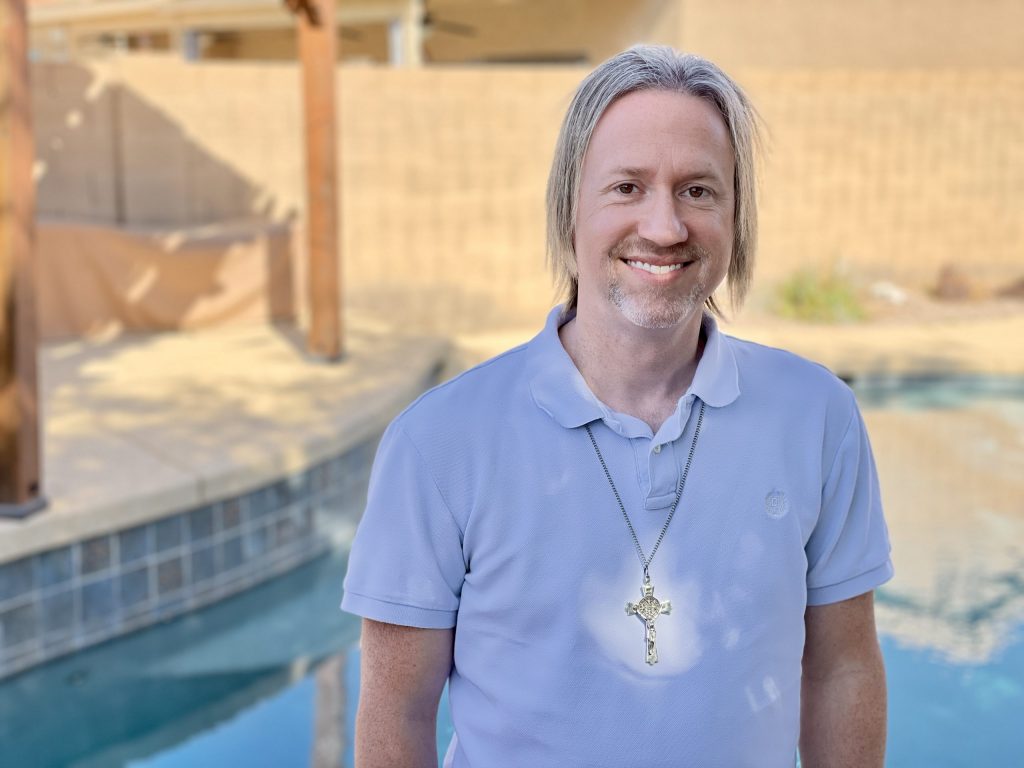 Some years before his conversion, Dan’s grandmother, Doree’s mother, had passed away. This was the impetus that had launched Doree’s journey to the faith. During that time, she had a dream that, with the help of religious sisters from Uganda, was interpreted to mean that her mother might be in purgatory and needed prayers.

After Doree began fervently praying for her mother, Dan had his own dream. In it, he saw his grandmother – young, beautiful and happy. They embraced and she disappeared. It was only after telling Doree about this dream did she reveal to him her dream and how her mother always wore clothing similar to what Dan described from his dream. The family believes that this was confirmation that Doree’s prayers had been answered and her mother was now in heaven.

The other three occurrences involved prayer and words “spoken to my soul, not my ears,” as he said. Once he was told “Hug him” and knew somehow that God wanted him to hug his neighbor. Dan fought this. He was not a people-person and barely knew the man. It took more prayer and two more signs from God to convince Dan to approach his neighbor and ask if he could hug him.

When they hugged, both men sobbed “like children.” It turned out that his neighbor had been going through a rough time and had even tried to take his own life. All he wanted was a hug; a comforting embrace to know that someone cared about him. Dan provided that.

The next “assignment” involved visiting a coworker who went to prison for a couple years for reasons beyond her control. Aside from her parents and children, Dan was her only visitor. His presence made her feel loved.

Though he no longer questioned the voice inside even when things seemed off-kilter, his last commission was somewhat more complicated. This time, he was asked to go to a young man with bipolar disorder, spending around three hours in a mental hospital talking to him. In that time, he learned a great deal about the condition.

However, that young man did not benefit from that encounter. Dan did. The real mission came at a band concert that Dan, as a music professor, was leading a couple of weeks later. Another young man, a drummer, showed up late after not having attended the earlier practices. Dan recognized the symptoms of bipolar disorder in the young man. “The Holy Spirit filled me with what to say.” Through Dan’s words, the young man became stable enough to perform well in the show, something that astonished his grandmother, who thanked Dan afterwards.

Dan often asks himself why he was chosen to receive these duties. It is both frightening and amazing. “I was probably the most callous one of our family,” he stated, the least likely one to be rewarded with such tasks. The only conclusion he reached is that God is still changing him from the inside out. “Each instance, it became very clear why He wanted me to do these things. They always ended in love. It has taught me to love my neighbor.”

To date, he hasn’t had another mission and wonders when or if he will. Either way, because of these personal encounters, Dan says he has “grown stronger in my faith, in my church. I’m forever grateful for the gift He’s given me.”