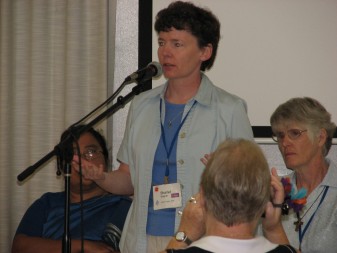 Sister Sharlet gives her input at a congregation meeting.

NOTRE DAME — Sister of the Holy Cross Sharlet Ann Wagner never dreamed what would happen if she said yes to God’s call to religious life. She compares her life to the words of a song by popular country-western singer Garth Brooks called “The Dance.” Brooks sings, “I’m glad I didn’t know the way it all would go. Our lives are better left to chance. I could have missed the pain, but I’d have had to miss the dance.”

Sister Sharlet says, “I’m sure Garth Brooks wasn’t thinking about a bunch of nuns when he wrote that song, but when I first heard it, it spoke strongly to me of religious life and my life in Holy Cross. While I wouldn’t agree with the singer that our lives are the product of chance, I resonate with the sentiment of ‘The Dance.’”

This dance of her religious life has consisted of both difficult and beautiful, joyous times but she says, “I would not trade the ‘dance’ that religious life is for me in order to avoid the difficulties.”

She finds it difficult to adequately put into words why she became a sister. It was a persistent attraction that began in her junior year at the University of Texas in Austin. She was a journalism major. Her life plan was to become a successful journalist and then settle down and raise a family. But her growing attraction to religious life threw her neat, thought-out plan into confusion. God had another idea.

She had never mentioned this before so she worried how her family and friends would react. Would they think she had lost her mind? Despite these fears, she says, “There was a pulling inside of me that I can only vaguely express.” She points out that one cannot put that feeling into words because the answer “has to come from the heart, and not from the head. …” For Sister Sharlet, becoming a sister was “a choice for love.”

After doing some “secret” research about religious communities, she finally got up enough nerve to talk to a Holy Cross sister who worked at the Catholic Center on campus. She only wanted her to answer one question, “How do I know that God is calling me to religious life?” The sister didn’t give her a list of criteria as she had expected.

“Her answer surprised me,” says Sister Sharlet, “She talked and listened, and finally said, ‘Sometimes you can’t know something is right for you until you have tried it. You just have to go ahead and do it.’”

She decided that evening that she wanted to do it. She chose the “dance” of religious life. This choice opened to her a variety of experiences she could never have imagined. Her college plans to have a successful career in journalism gave way to caring for crack and AIDS babies in inner-city Chicago, teaching high school English in Utah and working in a rural health clinic in Uganda, East Africa.

Following her return to the United States from Uganda, she began discerning the next steps in her life of ministry. As she reflected on her ministry experiences, she felt a pull towards justice issues and had a desire to address some that she had witnessed. Thus, her congregation gave her permission to study law. Three years later she graduated from law school and began a project providing legal services to immigrants imprisoned by the U.S. Immigration and Naturalization Service. As a sister, she hopes to bring “a sense of compassion and love” to those to whom she offers legal services.

Sister Sharlet practiced immigration law in Los Angeles, Calif. and Salt Lake City, Utah for several years. Last summer, she was elected to the leadership team of her congregation where she chooses love and uses the gifts God has given her as she continues the dance.