Graham Greene, a prolific English novelist who captured the beginning childrens transition to adulthood, wrote: “There is always one moment in childhood when the door opens and lets the future in.”

For some students at Most Precious Blood School, Fort Wayne, that door was opened by Jacob Bloom. A technology teacher at the school, Bloom has been facilitating an after-hours Computer Club on Fridays that’s complete with 3D printers and exciting educational opportunities.

“In the last two years, Most Precious Blood School has chosen to embrace 3D printing as a new technology for students to learn because of the variety of opportunities it provides,” said Bloom. 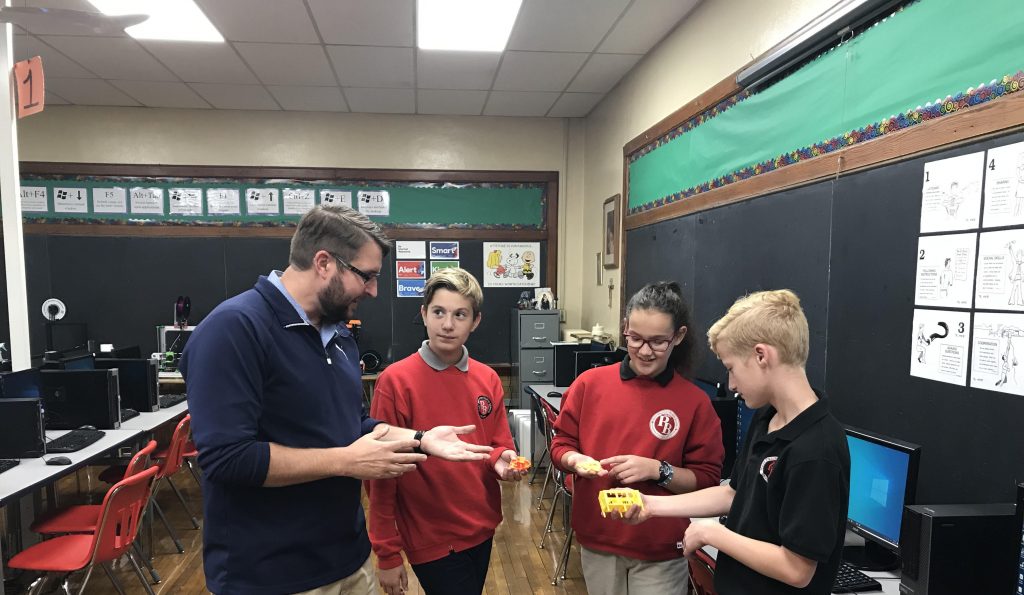 Jacob Bloom, technology teacher, instructs eighth grader Ben and seventh graders Margaret and Aaron in what to look for in their 3D prints. 3D printing is part of a computer club at Most Precious Blood School, Fort Wayne. — Photos provided by Jacob Bloom

The push to explore the technology started when Dustin Parmalee, a parent of two children at the school, contacted Bloom with the idea of starting the club. Not knowing exactly where it would lead, Bloom agreed to coach the students in the emerging technology.

About a dozen signed up. Bloom and Parmalee went over the basics with them and had a productive time printing up a few items. The men quickly realized that for the endeavor really to take off, a curriculum was needed — and additional printers.

Parmalee generated funding through private donors to purchase an additional three printers. Bloom donated one of his own.

“I had a lot of hands helping me raise money in this,” said Parmalee — and especially the helping hand of a parishioner, Sandy Sanders. “Everyone calls him Grandpa Sanders. Without his generous donation I don’t think we’d have as much cool stuff as we do.” 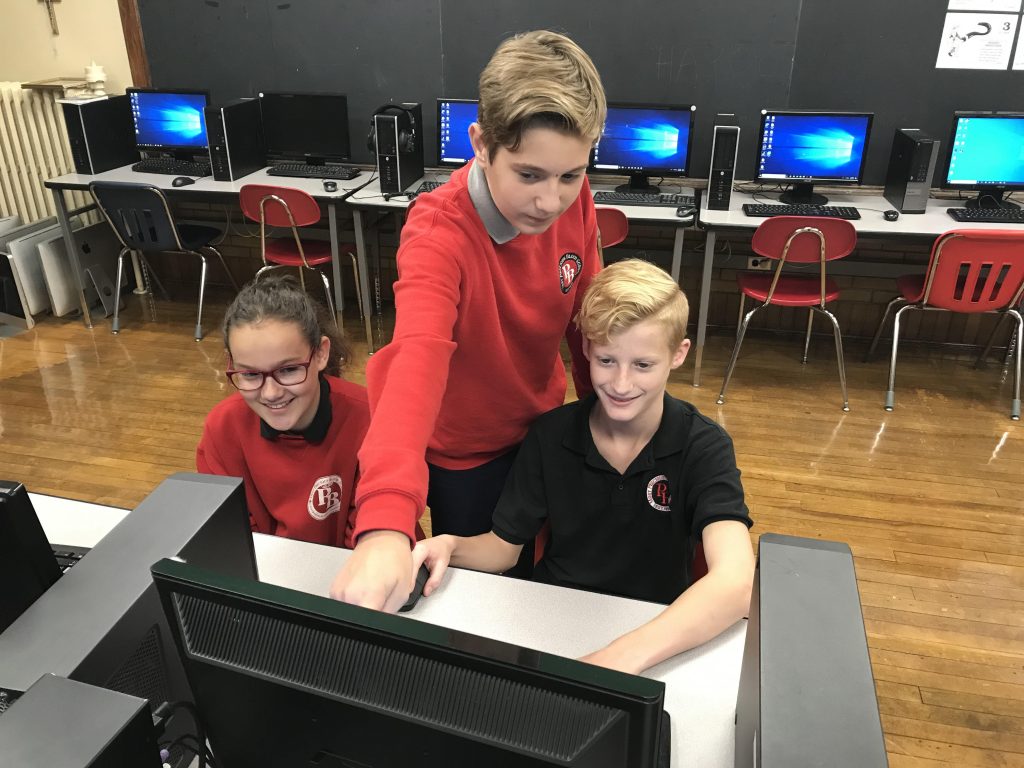 Ben shows Margaret and Aaron how to prepare a 3D model for printing during an after-school club at Most Precious Blood School.

With the six printers the club began the 2019-20 school year with a plan, said Bloom. “Taking a small group of students, we’re running through a 9- to 10-week program of learning how to get a third model from the computer to the printer, using 3D-design software to create objects and putting everything together to design and build carbon dioxide ‘Rocket Cars’ and race them in a competition at the end of the 10 weeks.”

The club is open to students in grades five to eight. Currently there are two fifth graders, two seventh graders and one eighth grader. After the 10 weeks are up, another group of students will be eligible to enroll. There is a cost of $10 to join the club, which covers materials.

The size of the class has to be limited because of the number of printers and the time it takes to complete each design.

“Originally, 3D-printing technology was very expensive to get started with. But as with all technologies, over time prices have really decreased,” said Bloom. “In fact, you can get a pretty decent starter-level printer for around $200.

“You do need a specific printer designed to print in 3D. Our printers use Fused Deposition Modeling technology in the lab. The printer takes PLA plastic, a vegetable-based biodegradable, heats it up so it can be laid down in flat layers, and then builds layers on top of the previous layer.” 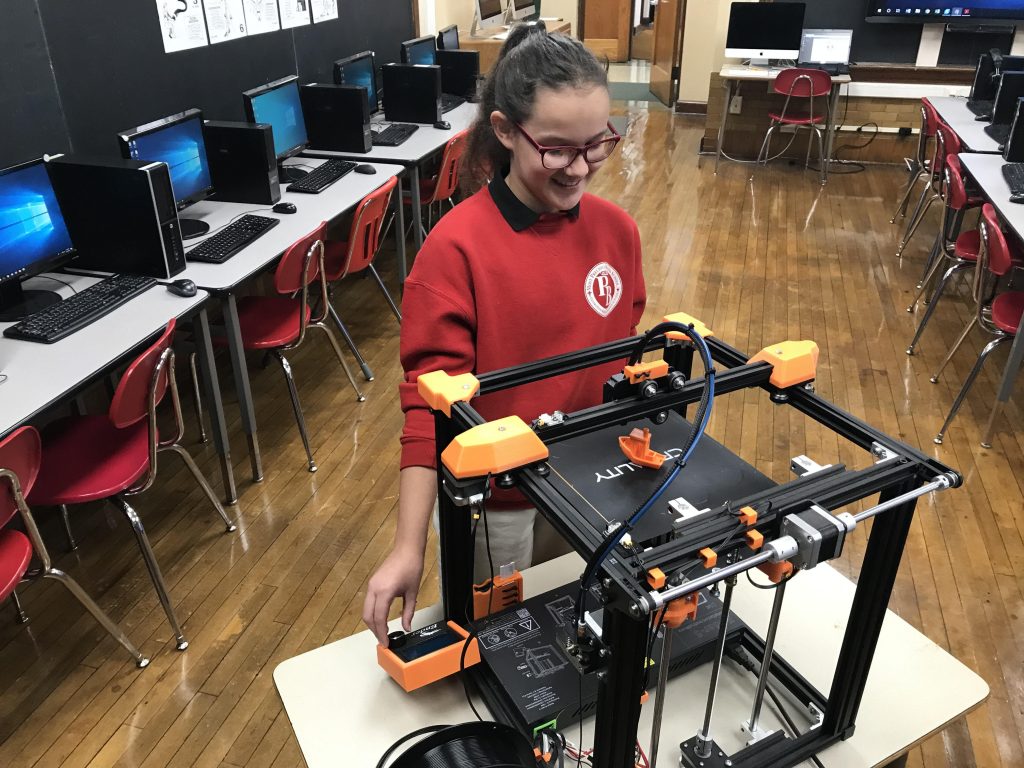 Bloom’s hope is that students exposed to the technology will think about how the skills will apply to their lives in the future. He thinks that with early exposure to 3D-printing techniques they can begin to determine if it might be a career they’re interested in.

“The kids love this idea of being able to make whatever you want when you want,” said Parmalee. “Need a door stop? Bam! Got one in 30 minutes. Need a folding fruit basket? Boom! One hour later you have a fruit basket which folds flat.

“The idea of wanting something and then making it without going to a store or asking their parents for the money is fun,” he said. “Showing them that prosthetics and even real body parts are being 3D-printed just blows their minds.

“With the drafting software we teach them to use, I anticipate that we can find a problem to something in life and make a tool, a machine, or a part that helps them fix it,” said Parmalee. “What Jake and I really hope to show them is that they have the power to change lives: And it all starts with one little idea and a prototype.”