There was one brief, shining moment in 1976 that left its seal on Fort Wayne resident Michael Floyd’s heart. He was in Philadelphia for a Eucharistic Congress, where he encountered Archbishop Fulton Sheen.

“What an amazing man: His eyes were a prism to his powerful soul,” said Floyd, a cinematographer and schoolteacher. He then saw a second person in Philly who took his breath away.

“I met Mother Teresa in an alley behind a building, where she walked over and sat down by a homeless man, with her bodyguards. He was bewildered by this little nun from Calcutta. She was amazing! She walked without fear and touched the hearts and lives of even those who many consider to be the ‘untouchables’ in life. 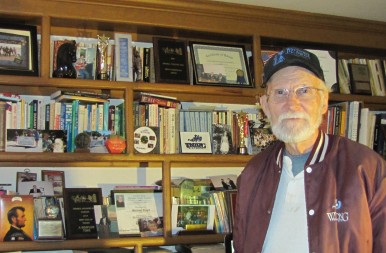 Michael Floyd, director, president, executive producer and founder of Windsong Pictures, is photographed in his Fort Wayne home studio, where many of the awards from the past four decades are displayed.

“I was close by, when she got up from sitting next to the homeless man. She looked at me, I gave her a smile and she smiled back. That is an instant replay I see over and over in my mind, and it meant far more than any words could ever express. It was a great blessing.”

From an early age, Floyd, one of seven siblings, was instilled with and inspired by the ongoing philanthropy and compassion of his family as well.

“Both my grandmothers helped people during the Great Depression,” he said. “People would come to their back door, and they would have a sandwich and cup of coffee for them. My maternal grandfather was a teacher who realized he could not feed his family during those difficult times on a teacher’s salary, so he opened a grocery store in Oshkosh, Wis. He fed his family … and 50 others, pro bono. 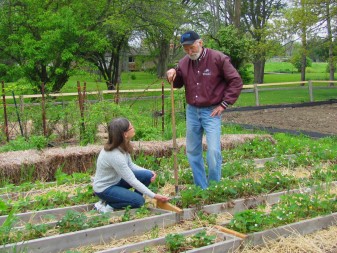 Floyd and his sister, Patty Floyd, who often helps with garden work and is a Windsong photographer, check the fruits and vegetables in the Windsong Pictures Gardens. The fresh vegetables are grown for such charities as St. Mary’s Soup Kitchen and Miss Virginia’s Mission House in Fort Wayne. — Photos by Barb Sieminski

My parents followed in that tradition of helping others, and I was involved with Sons of Mary, a community service organization, at Central Catholic High School. In 1966, I began working with and helping Miss Virginia Schrantz, and I have been engaged in leading food drives since then.”

Floyd and Georgia, his wife of 48 years, have been blessed with three children: Tonya, Jessica and Michelle, and a son they lost at birth. They have seven grandchildren.

A member of St. Mary Mother of God Church, Floyd earned his bachelor’s degree in secondary English and history at St. Francis College (now USF) and his master’s degree in educational administration at Central Michigan University. He has taught in Fort Wayne Community Schools and in Michigan, and was a Catholic school principal in Wisconsin.

His enthusiasm for charity work grew hand in hand with another lifelong passion. When he was 5 years old his parents took him to see a Hopalong Cassidy film, where he fell in love with the silver screen.

“For the next three days, kids around the neighborhood re-enacted every detail of the movie at my direction,” recalled Floyd, who many years later gave birth to Windsong Pictures, now in its 43rd year. Combining his love for kids, charity and filmmaking, Floyd is still living the dream with his family-friendly, philanthropic motion picture endeavor, a nonprofit 501(c)(3) youth organization impacting young people through the arts.

Many of Floyd’s 300 original films tie into his Catholic faith.

“Our films are always family-friendly and very ecumenical, in keeping with the precepts of Vatican II,” he said. For example, the film “Ripple” is about social injustice around the world, a direct spin-off of the work of Catholic Charities to release people from camps in Africa and Asia and from other situations in Latin America and eastern Europe.

Windsong’s charity efforts over the course of four decades include collecting and distributing more than 1 million food items to the needy and raising fresh vegetables for St. Mary’s Soup Kitchen and Miss Virginia’s Mission House from April to October. It supports the Christmas Food Box Program, which feeds more than 1,000 families at Christmastime, the Ave Maria House and St. Vincent’s Village for the Homeless. It provides tutoring for students in need and secures more than 1 million dollars’ worth of scholarships for college students. Windsong also has programs to comfort of students who come from challenging home situations and help them work through hardships, including abuse and abandonment. The company has also created promotional DVDs for other nonprofits such as Cancer Services, Old Historic Fort Wayne, Habitat for Humanity, MDA Summer Camp and more, pro bono.

“I work side by side with an all-volunteer staff of professionals. Students experience real life, hands-on learning situations, and through this the dreams of children come true,” he said.

Diversity is a key element in Windsong Pictures. “We engage students and their families from many ethnic, racial, international and religious backgrounds. We also serve students who come from dysfunctional and indigent families, along with students who are homeless, abused, physically challenged, victims of violence, medically homebound and bullied,” Floyd said. “Something that sets Windsong Pictures apart from other arts programs is that students never pay to participate; hence, the playing field is leveled. Everyone makes the team, and students of all ages feel accepted, safe and comfortable. How we care for others defines who we are.

God undoubtedly has a great sense of humor,” Floyd surmised. “We see examples of it all around us. I love humor and use it daily. When people are laughing, they are drawn to love one another rather than to hate. I always look for the beautiful goodness that exists in people.”