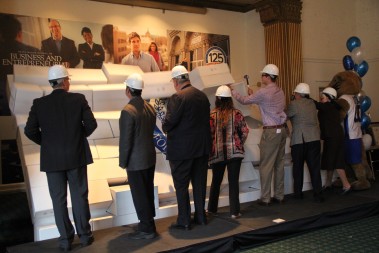 FORT WAYNE — A renovation celebration marked the official start of the conversion of the former Chamber of Commerce building in downtown Fort Wayne into the new location of the University of Saint Francis Keith Busse School of Business and Entrepreneurial Leadership on May 6.

During the renovation kickoff celebration, Franciscan Sister M. Elise Kriss, president of the University of Saint Francis in Fort Wayne, was named a Sagamore of the Wabash. USF Board of Trustees President Bill Neizer made the announcement for Gov. Mike Pence. The award recognized Sister Kriss for her outstanding service, strong institutional leadership and support of the community, region and state.

Sister Kriss proclaimed her deep gratitude for the award and admitted, “It’s not easy to surprise Sister Elise.”

She later added, “It’s a wonderful feeling. Surprise is a feeling I don’t often have. … I’m very honored.”

During the ceremony, Sister Kriss noted that the renovations were beginning in 2015, USF’s 125th anniversary year. 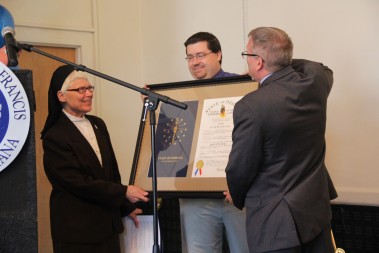 Franciscan Sister M. Elise Kriss, president of the University of Saint Francis in Fort Wayne, was surprised on May 6 as she was named a Sagamore of the Wabash. Shown, from left, are Sister Kriss, USF Director of Communication Rob Hines and USF Vice President of Institutional Advancement Matt Smith.

She said, “Two city treasures, the former Chamber building and the USF Robert Goldstine Performing Arts Center, begin their transformation as unique spaces for higher education. These spaces will be filled with students beginning with fall 2016 classes.”

In addition to housing the Keith Busse School of Business and Entrepreneurial Leadership, the university’s signature project-based learning program, META, will also be located in the building and four floors of the West Annex of the USF Robert Goldstine Performing Arts Center (former Scottish Rite) will be renovated as well, to house the School of Creative Arts Music Technology program.