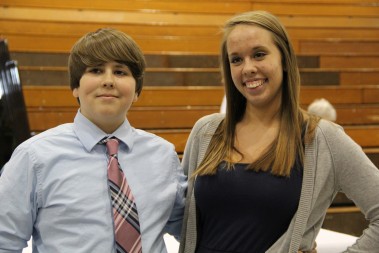 FORT WAYNE — Ash Wednesday of 2014 will always be a special day for siblings Zachary and Cassidy Blackburn. Zachary is a freshman at Bishop Luers and his sister Cassidy is a junior.

On March 5 the two made their first Communion at a Mass celebrated by Bishop Kevin C. Rhoades, who made his pastoral visit to the school that day after two other scheduled visits were cancelled due to winter weather school closings. The Blackburns were also among six Bishop Luers students — including Luis Munoz, Shayna Coy, Shelby Gillenwater and Samantha Falk — who were also confirmed that day by Bishop Rhoades.

Although the Blackburns are from St. Jude Parish in Fort Wayne, they have attended other churches, changed schools and did not make their first Communion in second grade like most of their peers at Bishop Luers.

Meg Hanlon, theology teacher at Bishop Luers, had announced earlier in the school year that she was offering classes to prepare students interested in receiving the sacraments.

Hanlon explained that last year at his pastoral visit, Bishop Rhoades encouraged the school community to a seek out young people who had been baptized Catholic as infants but had not received the other sacraments of initiation. He also gave permission to begin a RCIA-type program at Luers.

“At the end of last school year, we asked all of our students, through theology classes if they needed Confirmation or Eucharist and, if they were non-Catholic, if they were interested in learning more about the Catholic faith,” Hanlon told Today’s Catholic. “We had a very positive response.”

“This year we invited all who had showed interest to meet and see how we could serve their specific needs,” she added. “We had 11 students who had been baptized as infants but needed the other sacraments of initiation. Six students committed to the sacramental preparation meetings.” 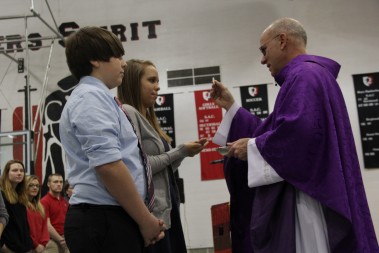 Bishop Luers High School freshman Zachary Blackburn, left, along with his sister Cassidy, a junior, center, receive their first Communion from Bishop Kevin C. Rhoades during Ash Wednesday Mass celebrated at the school on March 5. The Blackburns were among the six Bishop Luers students to also received the sacrament of Confirmation at the Mass.

Hanlon said the meetings were held after school and involved the theology of the sacrament and a close look at the specific sacramental rite.

“It is our hope that the witness of the six young people this past week will encourage others the ‘come and see,’” Hanlon said.

“In our initial survey, we had also had some non-Catholic and unbaptized students express interest in becoming Catholic,” she noted. “Two students, baptized non-Catholics, responded to our invitation and we will be meeting with them and help them discern if they desire to become Catholic.”

“We try to bring all of our students into a closer relationship with Jesus Christ,” Hanlon said. “This opportunity, begun with Bishop Rhoades’ encouragement, will be a wonderful way to accomplish that goal.”

Zachary and Cassidy were eager to sign up for the meetings.

On the morning of the sacraments, Zachary, spoke to Today’s Catholic about receiving his first Communion later that morning. His freshman theology teacher Ann Isch, who served as a proxy Confirmation sponsor for Zachary’s uncle, joined him.

“It means a lot to me,” Zachary said. “It’s nice to be able to receive a blessing,” at Communion time, he said, but he was excited to be “receiving Holy Communion every time I go to Mass,” he added.

Zachary said he was nervous, “but it is wonderful to receive Communion.”

He came with the strong backing of Ann Isch, who said, “You can really see the Spirit is moving in him today.”

After the Mass, Cassidy echoed her brother’s words and said of her first Communion, “It was very exciting.”

When Mrs. Hanlon began talking about sacramental preparation classes, “I just really wanted to do it. I wanted to feel like everyone else in the school and be able to receive Communion,” Cassidy told Today’s Catholic.

Cassidy is known as an optimistic student in the hardest of circumstances, noted English teacher Eileen Brodmerkel.

Cassidy said going through the sacramental preparation with her brother Zachary made the experience a bit “less nerve-wracking. But I was nervous.”

The two talked about the sacramental preparation on the side to make sure they understood the instruction.

Cassidy spoke about receiving first Communion as a teen. “The second graders look cute and stuff,” she said, “but I think I understood it more than what the younger students would.”

Zachary and Cassidy’s mom, Tammy, sat near her children at the first Communion and Confirmation and has been supportive of bringing the children into full participation in the Church.

Next up, Cassidy said she looks forward to graduating from high school next year and then plans to go to college and study speech pathology.