ORLEANS, France (CNS) — This year, the church celebrates the 100th anniversary of the canonization of St. Joan of Arc, a 15th-century peasant who is one of the most enduring female symbols in Western culture.

For several decades, she was associated with the French nationalist right. However, her image now transcends political divisions.

In Orleans, south of Paris, Joan of Arc is hailed as the liberator of the city. Statues, hotels, a church, a house, a high school, and shops are named after her. A square is named after Domremy, her native village.

St. Joan was born around 1412. At the age of 13, she repeatedly heard voices that gave her the mission to liberate France from the English invader in the Hundred Years’ War. 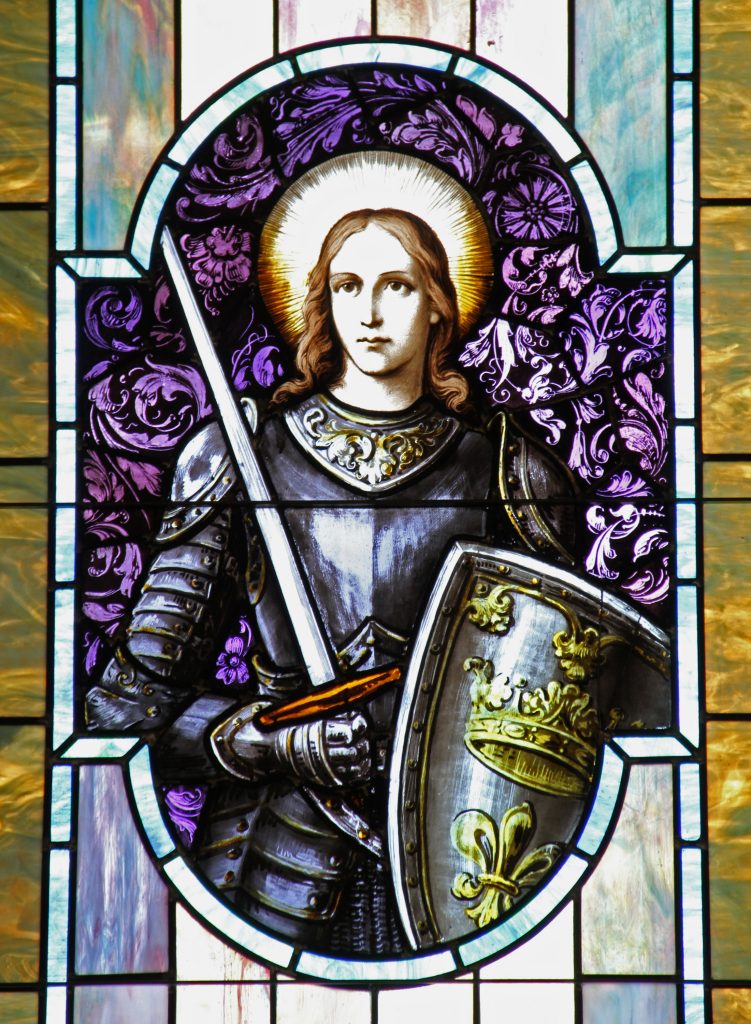 St. Joan of Arc is depicted in a stained-glass window at Immaculate Conception Church in Westhampton Beach, N.Y. This year, the Catholic Church celebrates the 100th anniversary of the canonization of St. Joan of Arc, whose image transcends political divisions. (CNS photo/Gregory A. Shemitz)

Introduced to the court of the Dauphin Charles VII, the teen was sent in 1428 to the siege of Orleans with a supply battalion, where her arrival brought a new energy. She took the initiative to write a letter to the British ordering them to leave Orleans. A week after her arrival, the British lifted the siege.

She then persuaded the Dauphin to go to Rheims, in Burgundy territory, to be crowned king of France.

Wounded while trying to liberate Paris, Joan of Arc continued to fight locally, but without as much success. In 1430, she was captured by the Burgundians at Compiegne and was sold to the British for 10,000 pounds. They took her to Rouen and entrusted her to Bishop Pierre Cauchon of Beauvais, one of the French advisers to the dual monarchy. Condemned for heresy, she was burned at the stake May 30,1431, at the age of 19.

Joan of Arc has been subject to numerous political reclamations since the 15th century. But at the end of the 19th century, she took on a mythical dimension.

France’s socio-political evolution paved the way for the myth of “a lay saint,” someone not seen as a political figure. It was in this context that Bishop Felix Dupanloup of Orleans filed a request for canonization before Pope Pius IX in 1869. Shortly thereafter, France was defeated by Prussia and lost the border region of Alsace-Lorraine.

“The elite then used her image as a heroic and martyred figure: Joan, the good (daughter of) Lorraine, symbol of national unification and patron saint of the lost provinces. She became the patron saint of the invaded, the one who resisted, a national heroine,” explained Olivier Bouzy, a medieval historian and scientific director of the Joan of Arc Centre in Orleans.

She then became the object of friction between Catholics and French Republicans.

“Quite paradoxically, she served as a link for the French, who could still unite around her, as long as they didn’t express what she embodied for everyone. It’s the period when she’s been written about the most: nearly one book a day between 1890 and 1920,” said Bouzy.

In 1905, the law of separation of church and state caused a rupture of diplomatic ties with the Vatican. Although a step was taken with Joan of Arc’s beatification in 1909, she was not canonized until May 1920.

The French Republic then decided to devote a festival to her as well, on the second Sunday of May. In 1922, she became the secondary patron saint of France, after Mary.

Since the end of the 19th century, both the left and the right wings have been appropriating the figure of Joan of Arc. The left sees in her a daughter of the people burned by the church and abandoned by the king. The right sees her as a saint, defender of the monarchy. During World War II, the Vichy government turned her into a figure against the British and the so-called Judeo-Masonic plot, while Gen. Charles de Gaulle recalled her courage and adopted the Cross of Lorraine as a symbol of the French Resistance.

It was not until the late 1980s that the nationalist right, led by the National Front, confiscated her image as a symbol. Every May 1, Jean-Marie Le Pen, leader of the National Front, organized his own celebration of Joan of Arc. His cry “Jeanne, au secours!” (Joan, help!) under a golden statue of Mary in Paris made such an impression that it prevented any other use of her image for many years.

However, Bouzy said that since 1999, he has seen “a new impetus, thanks to the impressive regenerative power of the myth” and the willingness of politicians of all stripes to retake Joan of Arc as a symbol. He even sees a renewed interest among French Catholics.

“Moderate French Catholics distanced themselves from her in the second half of the 20th century because they did not want to be associated with the extreme right,” said Bouzy.

The historian said Joan of Arc now has a variety of cultural meanings. She has become a feminist symbol: in the Anglo-Saxon world, she’s an LGBT figure, while in Japan she’s a manga heroine.

Cireau is a journalist for Presence info in Montreal.